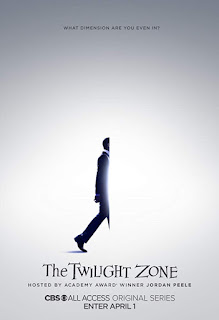 It is the middle ground between light and shadow -- between man's grasp and his reach; between science and superstition; between the pit of his fears and the sunlight of his knowledge. This is the dimension of imagination. It is an area that might be called the Twilight Zone, or it might be a review by Steve Taylor-Bryant...

I am not sure why, but Jordan Peele’s reinvented version of The Twilight Zone dropped on SYFY in the UK with pretty much no fanfare. I saw no big advertising, no TV spots, in fact if our very own Ren Zelen had not retweeted somebody else’s mention of the fact that all the episodes were now available on demand then I probably wouldn’t be sitting here typing and you would be doing something more productive with your day. Maybe it was planned that way, word of mouth is the best form of advertising, so I am led to believe, so I’m going to take my turn at spreading the message because The Twilight Zone is excellent television indeed.

Storytelling on television has always been pretty strong, the original incarnation of the show in 1959 created by Rod Serling was astonishing and I have lots of happy memories watching reruns of it with my grandad as a kid, but would a story of the week show work in this new ‘Golden Age’ of TV we are currently experiencing? You bet your arse it would. The concept remains pretty unchanged, the story starts and runs for a few minutes, then the narrator speaks, the iconic music plays and were off until the narrator comes in at the end and helps us makes sense of what we have just seen. The narrator in this instance is Jordan Peele, executive producer and co-creator with Star Wars: Rebels supremo Simon Kinberg, and its chilling how similar the feeling I get from Peele is to Serling all those years ago. Each episode tells a different story and of all the episodes I have seen so far they are all an important message about our society and how people act, important messages that many of us need to hear delivered in a smart way that may help the lessons stick. There is no hard and fast construct to run time from I have seen thus far with some episodes topping out around the 40 minute mark, and some like The Comedian knocking on the door of nearly an hour which is fantastic to see, storytelling being allowed whatever timeframe it needs to get its point across.

Writing and narrative wise the show is perfect. It takes important notions and builds compelling stories around them in a smart and entertaining way and the scripts are delivered by near perfect casts with the right amount of seriousness and very interesting payoffs come the end. The episodes are all beautifully shot and magnificent to look at and it’s obviously a show that the network have spent money on. I’ll be honest here and say I haven’t seen every episode available yet, but I’ve watched 7 of them and have yet to find a weak one amongst them. Some are more prevalent in their message than others for me and I am almost positive that some episodes will stand out for you than do for me. Every message in every story is important and we each take onboard whatever it is we need at the time and that there is some stunning storytelling, speaking to everyone differently at the same time.

Early highlights for me were The Comedian, a stand-up comic (Kumail Nanjiani) incorporates details about people he knows into his routines, unaware that every joke results in someone being erased from existence, which basically tells you that there is consequences to the things you say, people are affected by your words, and Replay which is an important story about racism and one that needs to be told generation after generation until it stops. Replay was an essential story, maybe not an obvious Twilight Zone type tale except for a video camera that can rewind time, but essential none the less. I also thoroughly enjoyed Six Degrees of Freedom about the first manned flight to Mars. Anyway, I’ll let you continue your day as I disappear into yet more of this wonderful show.