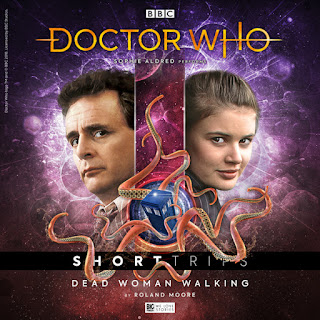 Ace is a Dead Woman Walking in a brand new Doctor Who audiobook short trip, out today from Big Finish...

Ace’s trust in the Doctor is tested as his meddling finds her in imminent danger. Doctor Who – Short Trips: Dead Woman Walking is released today.

Sophie Aldred narrates this explosive adventure for Sylvester McCoy’s Seventh Doctor and his companion. Ace will happily face off with a Dalek, but this time the enemy is coiled around her brain. Can she rely on the Doctor to get her out of trouble?

Doctor Who – Short Trips are short stories, many written by some of Doctor Who’s most popular authors from the worlds of television, print, comics and audio, and read by a host of favourite Big Finish actors.

The Doctor’s meddling has taken a tremendous emotional toll on Ace over their many adventures. However, this time, it may just cost her life.

Landing in the middle of a civil war, the Doctor hoped to discreetly meddle and then slip away unnoticed. Instead, he’s managed to infect Ace with an organic bomb. A bomb with a most unusual trigger.

If Ace dies, so does the planet.

Writer Roland Moore said: “My initial inspiration was to give the Doctor an impossible dilemma – he can't take his companion with him otherwise billions will die. Ace has to put her faith in the Seventh Doctor to come back and find a solution – but she can fully trust him?

“I also wanted to do a story with an alien parasite and show how Ace copes with an enemy she can't blow up or bludgeon with a baseball bat. She's forced to fight it in a different way.”

Producer and Script Editor Alfie Shaw added: “Dead Woman Walking plays with one of the fundamentals of Doctor Who, which is the Doctor’s willingness – particularly the Seventh Doctor – to put his companions in danger for the greater good. Here, his willingness to do so only exacerbates the problem!

“Roland’s done a superb job at capturing the Seventh Doctor and Ace, especially the unique aspect of their relationship where Ace simultaneously trusts and distrusts the Doctor. He’s done a great job at exploring the drama of that dynamic in a new way."

Doctor Who – Short Trips: Dead Woman Walking is now available to download exclusively from the Big Finish website for just £2.99.

Big Finish listeners can save money with a bundle of the Short Trips range and get the 12 stories from series 10 for just £30 – that’s a whole year’s worth of adventures, including the already-released stories, Decline of the Ancient Mariner (read by Mark Reynolds), The Infinite Today (read by Katy Manning), and Deleted Scenes (read by Frazer Hines).