Film - All The President's Men 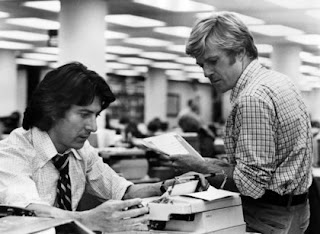 On this day in 1976 All The President's Men was released in the USA, here's a reminder of Steve Taylor-Bryant's thoughts on the film...


I've always thought the world needs more films about journalists. We have quite a few but they tend to be action oriented more than a portrayal of a hard nosed investigator with a nose for a story, so to see it done well we have to travel back to the 1970's. In American political history the 60's and 70's were such a rich era for stories. The end of Korea, the start of Vietnam, equal rights, the Kennedy brothers, and of course Richard Nixon. Nixon's eventual downfall was caused in part by two writers for the Washington Post, Carl Bernstein and Bob Woodward, and it is the Alan J. Bakula (Sophie's Choice/The Pelican Brief) directed film, with a screenplay by William Goldman based on the book by Bernstein and Woodward, which I hold up as the best film about journalism.

In the run-up to the 1972 elections, Washington Post reporter Bob Woodward covers what seems to be a minor break-in at the Democratic Party National headquarters. He is surprised to find top lawyers already on the defense case, and the discovery of names and addresses of Republican fund organizers on the accused further arouses his suspicions. The editor of the Post is prepared to run with the story and assigns Woodward and Carl Bernstein to it. They find the trail leading higher and higher in the Republican Party, and eventually into the White House itself.

The most extraordinary moments of the film if you are under 30 is the fact that Bernstein and Woodward didn't have the Internet or a mobile phone. In a day and age when anyone can be a journalist, columnist, or blogger (hell, if I can do it the whole world can) it is very easy to forget that research used to involve visiting a library, or talking to an actual person. When phone calls were made you had to actually remember the number and manually enter this into a box which had the headset tied to it by a cable! I really admire "actual" journalists, the ones that investigate facts and gain credible sources before typing up the story. The golden age of journalism was about integrity and fact checking. News is society driven. This modern age, when everyone expects everything on demand, it's very much a case of "if you snooze you lose" on the news front so you have to make compromises and cut corners in order to get the numbers. You have to go for the immediate "hit" and apologise after. If you wait to check the facts, you're old news. If you don't sensationalise you're old news. To be ahead of the game you have to deal in rumour and conjecture. The best journalists now are the ones who apologise when they get it wrong. It's sad but it's true - integrity and fact checking in news are as old and out of date as the typewriters and landlines the journalists used to use.

Bernstein and Woodward were under pressure but not to get the story, more to get the story right. The editors wanted multiple confirmations, were never happy that Woodward wouldn't name Deep Throat (FBI Deputy Director W. Mark Felt was eventually confirmed as Woodward's source many years later), and the word integrity appears in meetings quite a lot. There were many great journalists before Bernstein and Woodward, and since them there has also been a few although in my opinion not enough.