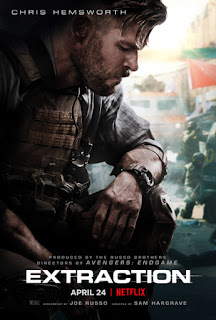 Chris Hemsworth and daredevil director, Sam Hargrave, give audiences a look into pulling off the high risk and action-packed, twelve minute take from the new Netflix film, Extraction...

Extraction follows Tyler Rake (Chris Hemsworth) a fearless black market mercenary who embarks on the deadliest mission of his career when he’s enlisted to rescue the kidnapped son of an international crime lord. But in the murky underworld of weapons dealers and drug traffickers, an already deadly mission approaches the impossible, forever altering the lives of Rake and the boy. Directed by Sam Hargrave, this action-packed, edge-of-your-seat thriller is produced by Joe and Anthony Russo, the visionary directors of Avengers: Endgame.

The action sequence was designed to look like one seamless shot that would include several car chases, pile ups, hand-to-hand combat, running through tenements, leaping and falling off roofs – all filmed on location in a densely populated community who were excited to welcome a Hollywood film production.

“We really hit the ground running,” recalls Hemsworth, who had just wrapped work on another film and packed what would normally take about 6-8 weeks of training into 2-3 intense weeks. “It was a shock to the system for all of us, but it set the pace for the rest of the movie and it didn’t stop. This is the most intense film — physically and emotionally — that I’ve ever done but it is also the most rewarding because it felt like we were achieving something special. Even though I was exhausted at the end of every day, there was a real sense of accomplishment.”

As a stunt coordinator, Hargrave’s skill set imbued the sequence with a unique intimacy that situates the viewer as close to the action as possible, while also advancing a key narrative point that sees Rake and Ovi finally starting to trust one another — something only a director with a background like his could’ve pulled off. In fact, Hargrave placed himself right in the middle of the action. “I was strapped onto the hood of a Polaris Ranger 1000 with a camera in my hand for the oner where we’re chasing our heroes in a Mercedes. The shot goes for about 30-40 seconds, then I leap off — they unclip me — and I lunge into the back seat of the car while it’s still moving,” he explains.

“Sam was not only demonstrating stunts for us, writing the sequences, and directing them,” recalls Hemsworth, “but there he is strapped in front of a bonnet as close to the action as you could possibly get. At one point his car crashed straight into the side of my car. We called cut and looked down and his leg was jammed down in between the two cars, but in some miraculous way, his foot was in that little gap between the wheel and the chassis. A couple of inches to the left or right and it could have been pretty gnarly.”

The goal ultimately was to capture the imagination of a sophisticated film audience used to big action sequences, while pushing the envelope as much as possible. “We wanted to take chances on some new things and put it together in a way people might not have seen before. We planned to present things that were familiar — car chases, stunts, crashes — but do it in a way that gets people right into the action,” says Hargrave.

“I tried to build a lot of variation, in terms of architecture and environment, into the chase sequence,” says Phil Ivey. “We start off in the woods, we go through an abandoned mill, through various streets, moving through the busier sides of buildings, and a big housing complex. It’s been a really involved process, working with Sam to find all the locations and making sense of how they were all going to fit together. It was hugely important to get it right because this sequence really sets up the world of Dhaka.”

Stunt coordinator Daniel Stevens had been rehearsing the scene for weeks. “Because we use one camera angle for the whole thing everything has to be perfect,” he says. “Normally if you’re doing a car chase or a fight, you’ll be cutting to different angles, so if you don’t get something perfect from one angle you can cut to the other, or cut to an actor’s reaction. But because it’s all in one continuous take everything has to be perfect in one go. It’s tricky but it also makes it more exciting for the audience because you feel like you’re in it, you don’t feel like you’re cheated.”

Toward the end of the scene, further down the road beyond an overpass, the special effects team led by Brian Cox had been prepping for the final explosion. “There was no option for it not to go right. This was a one take wonder.”

The end result is a thrilling, heart-pounding chase through the streets of Dhaka. “Aesthetically, it’s beyond unique,” says Hemsworth. “Each of the locations is so full of color and movement, with this energetic sort of chaos that Sam was able to somehow orchestrate. And the people of India were incredibly kind and supportive allowing us to create havoc in their streets.”

“Phil and Tom are both exemplary storytellers,” Joe Russo says, “so they’re constantly looking at how the set, the light, the look, can move the story forward and convey the narrative to the audience. Phil strives for realism with attention to the smallest level of detail which helps the audience and the actors feel the authenticity.

“And Tom is one of the best DPs in the world,” he continues. “He elevates the look of the film with his camera work, use of lenses, the way the characters move and how they relate to the camera. We wanted to create a combustible combination of arthouse and action. With a genre film you have to look for elements to elevate the genre – and by bringing this level of authenticity and a different style of filmmaking and smashing it into an action film, you can wind up with something really unique and inspiring.

Extraction comes to Netflix on 24th April at 08:00