Film - The Films that Made Me: Night of the Demon 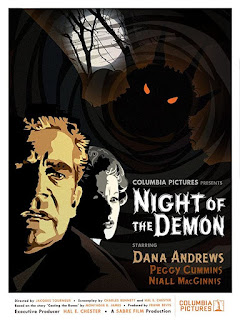 Ren Zelen looks back at some of the films that made her fall in love with cinema in the first place with The Films That Made Me. This time it's Night of the Demon (1957)...

One of the very earliest memories I have from my childhood is creeping out of my room in my pyjamas and sitting on the stairs peering through a crack in the door as my parents watched the scary movie Night of the Demon on television, late at night.

As a little kid it had a profound effect on me. Yes, the Demon in question frightened the bejeezus out of a little Catholic kid at that tender age, but the atmosphere and tone of the movie beguiled me and became the foundation of a lifelong love of all things gothic. It also foreshadowed my later obsession with the English ghost story - particularly those of the master of the genre, M.R James.

The inspiration of the English ghost story, as exemplified by M.R James, showed its influence on Gothic cinema in a use of subtle, atmospheric narrative devices which relied on insidious dread and mounting terror as opposed to the more lurid gore and bloodletting of its more graphic, garish horror rivals.

Jacques Tourneur’s adaptation of James’s story ‘Casting the Runes’ entitled Night of the Demon (Curse of the Demon in the USA) may be considered as one of the finest examples of a classic Gothic film, alongside Jack Clayton’s The Innocents (from Henry James’s story ‘Turn of the Screw’) Dead of Night (Ealing’s portmanteau classic) and the timeless, unsettling tour-de-force which was Robert Wise’s The Haunting (taken from Shirley Jackson’s masterwork of gothic fiction ‘The Haunting of Hill House’ and which can also be counted as another of ‘The Films That Made Me’).

Director Tourneur was the son of celebrated filmmaker Maurice Tourneur and had already made his name with such horror classics as Cat People (1942) and I Walked With A Zombie (1943). He was determined to bring his considerable experience and skill to work on Night of the Demon.

However, there is a discussion about Night of the Demon which rages among fans to this very day - the now iconic image of the eponymous demon was added to the film as an afterthought and was so disliked by Tourneur, who had intended to present his supernatural manifestations less overtly, that he made his dismay public.

The horror genre has always had to establish its worth in a way that the more ‘respectable’ genres were never obliged to do, and Tourneur clearly thought that such an explicit revelation of the ‘Demon’ had in some way impinged upon the artistic credibility of his film. Despite this controversy, many critics have come to see his film as a work of art, albeit a flawed one.

Anyone familiar with James’s story ‘Casting of the Runes’ may feel somewhat vexed at the inclusion of American actor Dana Andrews and the delightful Peggy Cummins hastily inserted as a romantic interest. It is a stretch to accept Andrews in the role of respected academic Dr John Holden, as the actor was more renowned for playing tough-guys or snooping reporters, but the studio deemed it essential to include an American name if they hoped to sell the film in the US. 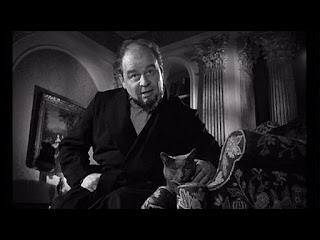 Mercifully, the virtues of the film lie elsewhere than in its incongruous protagonist - the core of the film is the mounting psychological battle between Andrew’s Dr Holden and a malign and enigmatic opponent, Doctor Julian Karswell, masterfully played by Niall MacGinnis.

It is Karswell that holds our attention - a practitioner of the black arts who has one particular vice, that of pride. He is especially vindictive to those in the academic community who refuse to take his work seriously. Unfortunately, he is hampered by his subject’s lack of credibility and his own personal lack of skill in writing, making his books and treatises next to unreadable.

His victims include the unfortunate Professor Henry Harrington who has written a stingingly critical review of Karswell’s book ‘The History of Witchcraft’. Part of Karswell’s revenge is the ‘Casting of the Runes’. This involves passing a sliver of parchment containing a combination of ancient runic symbols to the victim, who is then cursed to die at the hands of a demon after an allotted time unless he can pass the parchment on to someone else to take the curse in his place.

Karswell is unlike some of the more dramatic practitioners of the black arts that we see in later films. He is understated, ostensibly unthreatening and unfailingly polite, all of which make him all the more sinister and inscrutable.

In the film, Dr. John Holden arrives in Britain to attend a psychology symposium at which Harrington had intended to expose Karswell's satanic cult. Holden is a sceptic and does not believe in Karswell's power. Soon afterwards, Karswell courteously introduces himself to Holden in what seems to be a chance meeting in the Reading Room of the British Museum. Meanwhile, he surreptitiously smuggles the runic parchment into Holden’s papers, thus placing him under the curse.

This scene establishes the unmistakable Englishness and academic flavour of M.R James’s tale, thanks to Karswell’s singularly ‘British’ passive-aggressive manner and its adherence to James’s habit of setting his characters in very specific locations. This aspect of the film is established from the outset by cinematographer Ted Scaife in his shot of a windswept Stonehenge, suggesting both its location in Britain and its connection to the ancient forces of mysticism.

Holden is repeatedly warned about Karswell’s malevolence and occult powers but remains stubbornly sceptical despite frequent evidence, including a demonstration that Karswell himself offers at a children’s fete that he is giving in the grounds of his opulent home. Karswell calls up a violent storm that sends the garden furniture flying and the children fleeing in panic, all the while wearing grotesque clown make-up from the dubious ‘magic show’ he was presenting to the children. (Thanks to more recent cinematic offerings we have all been conditioned to associate ‘clown make-up’ with dangerous or unhinged behaviour).

As the countdown to the curse begins taking effect, a series of supernatural and disturbing incidents build the tension and lead inexorably to a climax. The final confrontation between the now believing Holden and Karswell is set at on a train at night and sees them ever more desperately trying to pass on or evade the runic parchment before the Demon is due to appear and horribly destroy his victim.

Tasked with adapting James’s story to the screen was scriptwriter Charles Bennet. A favourite of Alfred Hitchcock’s because of his ability to combine well-written dialogue with a cogent narrative (Hitchcock had used him in Blackmail (1929), The Man Who Knew Too Much (1934) and the best of all The 39 Steps films (1935). Bennet’s original screenplay apparently does describe the demon in his manifestations, despite Tourneur’s protestations that he wanted to show the monster only obliquely. (The UK version is 14 minutes longer than its American counterpart and more explanatory).

Despite stilted acting from a bland ‘hero’ and what now seem to us to be rudimentary special effects we are still willing to suspend our disbelief and allow ourselves to be swept up in the story. Our suspension of disbelief is thanks to Tourneur’s expertise in creating a creepy, unsettling atmosphere and in choosing an actor who could imbue his ‘villain’ with enough insidious menace to unsettle us yet maintain a vestige of sympathy. When doting son Karswell confesses to his mother that his supernatural abilities exert a terrible price, we see him as not simply as wicked, but as a man who has sacrificed his humanity and now lives in mortal fear of the powers he has unleashed.

The Demon himself has become a legendary creation, his famous appearance still succeeds in being rather startling and the use of costumes and models is very effective for 1957. (Special effects aficionados should really see how some old films could do this successfully).

Renowned director Tourneur is at his best here, creating a sense of suspense and mystery. The film is an atmospheric and witty horror classic, and contrary to the director’s misgivings, the demon himself remains an iconic and frightening vision of evil.