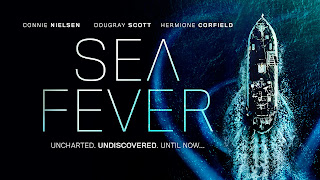 On digital release from Friday and DVD/Bluray from April 27th, thanks to Signature Entertainment, Ren Zelen watched Sea Fever...

What to do when your boat is stranded in the middle of the ocean having been seized by a sea creature, the like of which no-one has seen before? Writer/Director Neasa Hardiman has us ponder this question in her feature Sea Fever, a movie where an underwater entity menaces the crew of an Irish fishing trawler.

Reluctantly on board is Siobhán (Hermione Corfield) a socially phobic doctoral candidate in marine biology. She’s living her nightmare – having to share close quarters with other people after she is assigned course fieldwork where she is required to photograph the boat’s catch for ‘abnormalities’.

The trawler is run by a married couple Freya (Connie Nielsen) and Gerard (Dougray Scott) with shipmate Johnny (Jack Hickey), his auntie Ciara (Olwen Fouéré), Sudi (Elie Bouakaze) and Syrian engineer Omid (Ardalan Esmaili), who is anxious to finish the job and get on shore again as he’s about to become a father.

Siobhán finds herself amidst this friendly, tight-knit crew, an uncomfortable situation for her. In addition to her lack of social skills, she shocks the seafarers by revealing herself to be a red-head - traditionally a nautical harbinger of bad luck - and dismissing their superstition as silly and unscientific.

Freya tries to befriend the awkward Siobhán by showing her the beautiful traces of bio-luminous phytoplankton visible in the boat’s wake at night. She regales Siobhán with maritime tales about how the trails of light are said to be the glowing tresses of the legendary Niamh Cinn Óir (after whom the boat is named) who, being heartbroken, “gave herself to the sea” where she now dwells forever.

This lyrical mix of nautical myth and science characterizes the film. ‘Sea Fever’ itself is a reference to sailors’ slang for a form of psychosis associated with onboard sleep deprivation (the crews of fishing boats work long night shifts).

Gerard and Freya are in serious financial straits and struggling to pay their loans. Unbeknownst to Freya and the crew, skipper Gerard succumbs to desperation in hopes of finding a good catch and steers the vessel into a zone that’s been designated as off-limits by the coastal authorities (for unexplained reasons).

However, once the boat trespasses into the ‘exclusion zone’, it suffers an apparent collision. Down below what are initially assumed to be giant barnacles attach themselves to the hull, secreting a gelatinous substance which begins to eat straight through the wood.

“Things happen at sea,” shrugs ship’s mate Johnny, indicating that Siobhán shouldn’t be too alarmed, but she is desperate to get to the bottom of what is plaguing the vessel, and begins to work with engineer Omid to find a way to save the ship from sinking if the hull is breached. This means diving down to find out exactly what is preventing the boat from moving.

The crew are now helpless as they tell Siobhán that “fishermen don’t swim… ’cause it’s better to go fast, nobody wants to drown slow” – and she is the only one on board who has diving gear and can clear up the mystery. She is ‘volunteered’ to dive down under the ship in order to pry the giant ‘barnacles’ off the outside of the hull.

Once underwater Siobhan discovers what has disabled the craft – it is the glowing, eel-like tentacles of a hadopelagic creature which are clinging to the bottom of the trawler, possibly having mistaken it for a whale. It seems she’s found a marine ‘abnormality’ the like of which she hadn’t dreamed of.

When another vessel is spotted nearby, a scouting party is hurriedly assembled to go row to it to ask for help. However, it’s discovered that its crew has met a very unpleasant end. Sworn to secrecy by skipper Gerard, who blames the tragedy on ‘sea fever,’ Siobhán soon realizes that their boat is also at great risk. The creature that has attached itself to the trawler is of a parasitic nature and is releasing its eggs into their water supply. Siobhán begins to doubt whether they should venture back to civilization as they may now bear a deadly parasitic infection.

Hardiman brings a Lovecraftian dread to her movie, rarely resorting to jump scares or traditional horror movie tropes. She prefers to increase the tension by using the claustrophobic spaces of the boat, escalating paranoia, our fear of the unknown deep sea and of drowning, then punctuating it by explosive moments of horror.

She places an ensemble of characters into isolation in a perilous and remote situation, merging the beauty of sea legend and the freedom of open water with an enigmatic monster movie. She cannily maintains an element of plausibility to the story – Sea Fever is a tale of normal folks with normal lives who have to face the simple fact that we genuinely have less idea about what lurks in the depths of our oceans than we have of outer space.