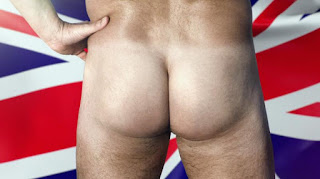 Channel 4 have planned a brand new #StayAtHome campaign set to launch across Easter weekend and created to amplify the important public health message to Stay Home, Save Lives. [aka Saving Your Own Arse - Ed].

A series of 10 second, fly-on-the-wall style films, self-shot by a host of well-known Channel 4 faces reveal the celebrities carrying out mundane tasks at home during lockdown.

The short films are aimed particularly at hard to reach young male viewers and will launch this evening in ad breaks during the broadcaster’s smash-hit Gogglebox, which attracted its biggest ever live audience last week averaging 4.3 million viewers.

In addition, a new cheeky Channel 4 brand film encouraging viewers to stay at home features the voice of comedian Matt Berry crying “Britain! When was the last time you did something that really mattered, with your arse? We need your buttocks. No ifs. Just butts. Because we’ll beat this faster, clenched together, on the sofa.”

The campaign will run across Channel 4’s portfolio of TV and social channels carrying the hashtag #StayAtHome.

It forms part of the broadcaster’s wider #StayAtHome activity which includes a ‘StayAtHome’ on-screen graphic across Channel 4, E4, More4 and 4Seven that has been seen by almost two thirds of the population and a special #ClapForOurCarers ad break takeover that saw 39 advertisers join together to thank the NHS and join in with the national moment.

Zaid Al-Qassab, Chief Marketing Officer, Channel 4 said: “TV has a hugely important role to play at this time of national crisis and we hope this campaign, starring some of our most-loved talent and with its typically irreverent Channel 4 approach will reinforce this vital public health message to stay at home and help save lives, particularly among our key young male viewers.”

Lynsey Atkin, Executive Creative Director, 4Creative said: “There has never been a more important time to unite people by reminding everyone that we all have an arse. And what we do with it counts. So sit yours on the sofa and do not move. Your country thanks you.”

Here's just a few of the new #StayAtHome suggestions for things to do over the Easter weekend, just for fun...