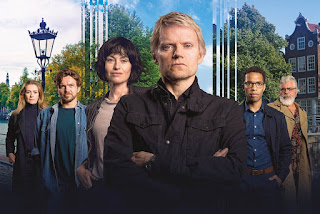 Van Der Valk centres on the investigations of detective Piet Van der Valk (Marc Warren) in and around the city of Amsterdam as he investigates a series of high profile cases immersed in the worlds of art, politics, addiction, mysticism and the fashion industry.

The first of three feature-length episodes, all of which were written by Chris Murray (Lewis, Midsomer Murders), is set against the backdrop of impending elections, as Van Der Valk and team investigate the mysterious deaths of two innocents with no connection to each other or to crime. It is a puzzle that leads Van der Valk into the world of politics as well as both the mainstream and avant garde art scenes and brings him up against the city’s high-flying politicians, risking the life of one of his team before ultimately uncovering a clock-ticking kidnapping that fuses political elements with a heart-rending personal story of betrayal, loss and obsession.

The original series was loosely based on the novels by Nicolas Freeling and provided 1970s British TV audiences with their first truly international detective – a complex, thoughtful and ‘real’ sleuth who tackled tough crimes against a picturesque Dutch backdrop. The new series re-imagines Van Der Valk in the contemporary world of Amsterdam and follows an engaging, unapologetic and street-smart detective as he leads his dynamic team in solving a raft of mysterious crimes using astute human observation and inspired detection.

Van Der Valk is produced by Company Pictures for ITV and co-produced by NL Film, ARD, All3Media International, and Masterpiece.