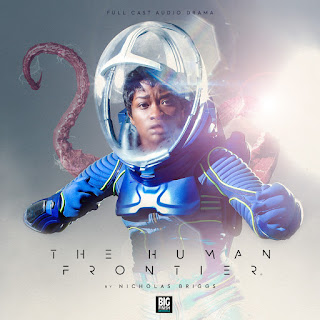 The final release in the Big Finish Originals range, The Human Frontier is a culture-clash of people from hundreds of years apart coming face to face. It’s also a love story, a story of a struggle for power and a futuristic murder mystery.

Two sets of Earth colonists, both setting out for the planet ND492. One crew takes the long route, sleeping for 1,000 years, in secret, on a ship called The Human Frontier. The other crew set off hundreds of years later, at hyper speed.

When the sleepers wake as they approach the planet, the hyper-speed crew have been living there for 300 years already – and they have no clue the ‘sleepers’ are about to arrive.

Script editor Scott Handcock played a valuable role in crafting the narrative of the story. He explained: “One of the lovely aspects of working on the Originals range, as a producer and director on series like Cicero and Blind Terror, was finding out what else was being created.

The scope of the Big Finish Originals umbrella allowed for everything from historical drama to psychological thrillers to gritty horror and – in The Human Frontier – a multi-layered examination of human identity in the far and distant future.”

“When Nick asked me to script edit, he was keen to keep the precise story details close to his chest so I could be as surprised and intrigued as the audience, episode by episode. The setup hooks you and the mystery pulls you through, with some lovely twists and paranoia that people have come to expect, particularly from Nick’s work on The Prisoner. And, as per the Originals’ brief, it’s unlike anything else at Big Finish!”

Part 1: The Possibility of Life

Anna and Daisy wake up at two different points during their 1,000 year journey. Once for an alien encounter and once for a dire emergency. But sleeping for centuries can affect the mind in strange ways. Meanwhile, on the planet Triton, a president is about to fall from grace.

Anna is glad of her implanted AI ‘Nilly’ for company. How else will she get through the coming ordeal?

A devastating conflict in Earth’s past has ramifications, even centuries later.

With The Human Frontier now in orbit, is the past about to repeat itself? 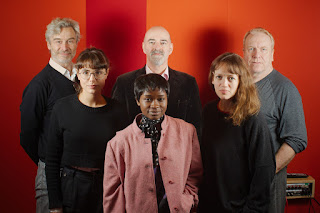 Actor Pepter Lunkuse said, “Anna goes on a really epic journey from a girl just falling in love to losing her lover, from having to save the world to understanding what it means to be human. And I got to wear a spacesuit!”

Actor Genevieve Gaunt added, “It’s been fantastic. We’ve been fighting aliens, I’ve been falling in love, I’ve been falling asleep, I’ve been waking up, I’ve been running around. I can’t believe this is work! This is just heaven. Nick Briggs is a great director, but he’s also written this. It’s wonderful, and we’re exploring new territory. Really exciting. It has been an explosive adventure.”

Writer/director Nicholas Briggs enthused, “A phrase I overuse, but it is true, is that for me it’s beyond exciting. I felt such joy and fear simultaneously. I’m not one for white-knuckle rides but I’ve done a couple, and this felt rather like that. The experience in the studio was fantastic. Everyone picked up on the amount of emotion I had invested in this, and all of them ran to my aid, fully supportive. Our great producer Emma Haigh was also there at every moment to help. It was one of the most heartening experiences of my life so far.”

The Human Frontier is now available to own as a digital download exclusively from the Big Finish website, priced at just £16.99. Here's the trailer...