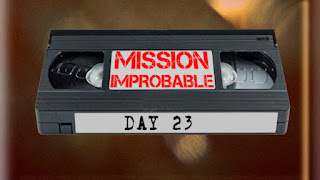 Your mission should you choose to accept it is to let Steve Taylor-Bryant's brain explode whilst thinking as he plays Mission Improbable: Day Twenty-Three...

Dolph Lundgren was in Aquaman with Nicole Kidman…


Nicole Kidman was in Trespass directed by Joel Schumacher (see how I avoided Batman & Robin?)