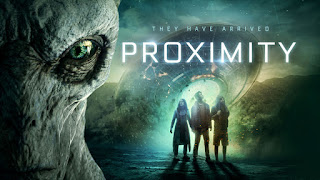 From before the 1970s stories about UFOs sightings started appearing everywhere, from books, to dodgy documentaries, to films. Countless reports of alien abductions followed and have been fertile ground for sci-fi films and TV shows, providing thriller material as well as a context in which to examine questions regarding the state of our own planet and its inhabitants.

One of the latest cinematic offerings regarding the ‘Alien abduction’ sci-fi sub-genre is Proximity, directed by Eric Demeusy and co-written with Jason Mitcheltree.

Proximity follows the story of Isaac Cyprus (Ryan Masson), a naïve, young, NASA Jet Propulsion Laboratory scientist and mathematics whizz-kid. Isaac is encouraged by his therapist to create a daily video journal. Reluctant at first, he decides to begin this project by hiking into nearby wooded hills and filming his trek.

While creating his video diary, Isaac manages to capture on film what seems to be an unusual meteor strike in very close proximity to the secluded spot where he is located. However, being so close to the event what he actually sees in far from just a meteor hitting the ground. In fact, what he sees is a shining, spinning disk hovering between the peaks, which disappears as quickly as it arrives.

With his camera still recording he is alarmed to suddenly feel he is being watched. He turns to find he is being observed by a humanoid being, one that is clearly not of this world. Terrified he flees.

Bemused and disoriented, the next sensation he feels is confusion upon finding himself sitting in an entirely different location at dusk. Stumbling back to his apartment what he next discovers is even more shocking – it seems that if he concentrates, he is able to make objects disappear and reappear, possibly thrusting them into an alternative dimension. 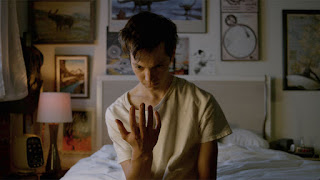 He is in for another shock, as when he returns to work with his colleagues in the NASA lab the following morning, they inform him that he has actually been absent for three days.

When he examines the film he has on his camera, the alien presence is clearly visible, and his sighting is closely followed by what seems to be his body leaving the ground at speed.

He shows the film to his colleague who can hardly credit its authenticity. Naively, Isaac thinks that by posting the film onto the internet he will be able to give people concrete proof that aliens exist and have visited us. Instead he creates a media storm and a heated debate as to the veracity of his film.

Feeling despondent, Isaac concludes that the only means he might have to confirm the experience, even to himself, is to contact others who say they have undergone the same encounter.

He manages to persuade one young woman called Sara (Highdee Kuan) to meet with him and exchange information. However, Sara is nervous and suspicious, and not particularly willing to share her story.

Her fears prove to be well founded as a shady government group has been following Isaacs’ endeavour and, after tricking him into taking a polygraph test to check the veracity of his claims, they kidnap him and take him to a secret facility.

Here they attempt to examine what effects the abduction might have had upon those exposed, so just for good measure, they capture Sara as well. However, the agents haven’t counted on the strong-mindedness and ingenuity of the seemingly guileless young scientist.

Finding that no one believes their story, the youngsters become determined to find further proof. Their endeavours lead them on a globetrotting adventure of discovery, all the while trying to evade the powers that want to gain access to the secrets they hold.

If not entirely original, nor blessed with a scintillating script, the movie is nevertheless peppered with top notch visuals and a some well executed ideas. Add in some exotic locations and it looks like a slick and glossy big budget picture. A lot of credit goes to cinematographer/writer Jason Mitcheltree and the special effects crew. The movie also has a charming performance from Ryan Masson as Isaac, the wide-eyed, nerdy and ultimately ingenious central character.

If you’ve ever been a fan of B movie sci-fi the prologue will likely draw you in. The soundtrack is a page out of the epic Spielberg/Williams playbook, and instils the movie with a sense of ‘Spielbergian’ wonder. However, the inclusion of the pop song elements can sometimes feel intrusive.

Also, although the scenes featuring Isaac’s work at NASA and the advanced technology used by the shady government unit look pretty nifty, don’t expect too much authenticity regarding the scientific basis of the plot.

Despite the inclusion of NASA collegues and a couple of handy tech nerds called Zed (Christian Prentice) and Carl (Don Scribner) that join our protagonist along the way, the science or tech isn’t expanded on. Perhaps the most distracting and disappointing element in an enjoyable storyline is a suddenly and unexpected swerve into aspects of (an exclusively Christian) spirituality. Guess that’s a creative choice but for me it diminished an otherwise arresting alien encounter.

A few elements of all contemporary alien movies rankle with me, for example – why do aliens always look much the same? Our lack of imagination seems to offer few choices – they are either the grey humanoids with large craniums and slanted eyes, cephalopod-types or a variation on Giger’s iconic Xenomorph. Also, why do advanced civilizations who travel light years to other worlds wander around naked? Don’t they believe in wearing clothes or suits to protect themselves from the vagaries of our weather, our bacteria, microbes or viruses? One is left to suppose they’re well past any stage of primitive embarrassment or vulnerability.

Signature Entertainment presents Proximity on Digital HD from May 18th
Email ThisBlogThis!Share to TwitterShare to Facebook