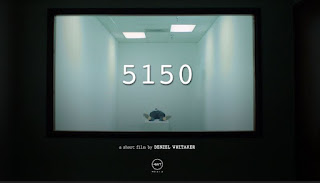 5150 is a short film starring Jovan Adepo (When They See Us, Watchmen) as Celeb— a world-famous but narcissistic celebrity whose erratic behaviour leads him to be confined in a psychiatric institute under mysterious circumstances.

Influential, arrogant, a genius, and a nuisance— CELEB is a globally recognized star who is well known for his political statements and increasingly for his erratic behaviour. At the height of his antics, Celeb awakes in a peculiar hospital room, confined for a reckless and violent outburst. During his stay, he is visited by three key women in his life: his publicist, his wife, and his mother. Despite the immense fame that Celeb commands, and his incessant need to challenge the system, these women admonish him of the dangerous repercussions he must now face. As pressure mounts, will Celeb come to terms with his own actions or push the boundaries of his own sanity in pursuit of a mysterious force that he calls THEY?

Written and directed by Denzel Whitaker and Executive Produced by David Oyelowo (Selma), the film explores mental health within the black community and the sometimes toxic power of celebrity.

The film itself also aims to be a positive example of filmmakers of colour supporting one another with Oyelowo providing leadership and mentorship for Whitaker as director and Adepo as star of 5150. Set to film in Los Angeles over the summer, the production faces the added challenges created by the global pandemic. The team has developed production guidelines to keep the cast and crew safe during filming and intends to make these resources available for other productions in the future.

“Now more than ever, people of colour have the greatest opportunity to be heard and share our unique perspectives through film and television,” says director Denzel Whitaker. “This project is a chance to explore the interrelated issues of mental health and celebrity from the perspective of a global icon played by the incredible Jovan Adepo.”

Their Kickstarter page goes on to explain more about the mental health aspect of the film, especially relevant at a time when racism is sadly again centre stage on the world's news:

"The modern obsession with celebrity is complex and pervasive, affecting nearly every person on the planet. The role of the celebrity is constantly changing and evolving but we don't often step back to consider the implications, especially for young people of colour."

So, as well as the feel-good feeling of helping the film, what do you get for money? As well as the usual digital release of the short film once it is ready, you can pledge to receive production photos, an invitation to the pre-release online party, your name in a "thank you" credit or even a part in the film itself. There's also the opportunity to attend Q&A's with cast and crew or, if you're an aspiring film-maker yourself, what about splashing out on a short film workshop, a 1 to 1 meeting with the director, or a consultation on your own film project!

The film is currently in its final week of an "all or nothing Crowdfunding Campaign on Kickstarter.

Please watch their campaign video and consider giving 5150 your support.