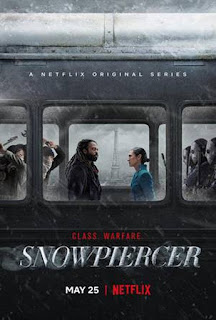 With the TV adaptation of Snowpiercer starting on Netflix on Monday (25th May) here's what (according to Netflix anyway) you need to know about the series...

"Attention all passengers, Mr. Wilford would like to address the rumours of disturbances in the tail. Let me assure you, your security is our highest priority. Order will be restored."

The series is loosely based on the film directed by Bong Joon Ho (which was based on the French graphic novel Le Transperceneige) and, set seven years after the world has become a frozen wasteland, centres on the remnants of humanity who inhabit a gigantic, perpetually-moving train, the eponymous Snowpiercer, that circles the globe. Class warfare, social injustice and the politics of survival are all questioned in this adaptation, which is neither sequel or prequel to the original film but not a direct adaptation either, because it expands on the initial premise, exploring new characters and previously unseen areas on the train as well as using the 10 episode season to delve deeper into the dynamics involved.


From the look of the listings schedules, though it's not going to be a binge-watching frenzy as, after an initial double episode on Monday (25th), we're going to get one episode a week on Netflix for the ten episode first season, to mirror the episodes being aired on TNT in the US. However, the good news is that a second season has already been confirmed

Watch Snowpiercer: The Series on Netflix starting from Monday