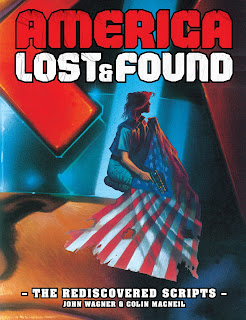 Long considered one of the most important stories in British comics history, the long-lost scripts behind the Judge Dredd story America are now to be revealed in a brand new book from Rebellion...

America was a Judge Dredd story about freedom, terrorism, and armed struggle that has fresh and powerful resonance in today's world - and America: Lost & Found - The Rediscovered Scripts takes you behind-the-scenes on John Wagner and Colin MacNeil's groundbreaking story, which confirmed Judge Dredd's place as one of the most politically charged and nuanced series in comics.

Rediscovered by chance three decades after publication, Wagner's surviving scripts for America are now presented with in-depth commentary from the writer, revealing for the first time the thinking and process behind this shockingly mature and morally-complex story.

The script is then followed by the story itself, with MacNeil's beautifully fully-painted art remastered and still delivering its emotional gut-punches after 30 years.

With new introductions from John Wagner and Garth Ennis (Preacher, The Boys), this is an absolute must-read for fans of Judge Dredd and the processes behind making comics, but also those looking for insight into the politics and evolution of one of the most famous comic book characters of all time.

Originally published in the new Judge Dredd Megazine between 1990 and 1991, America heralded a new phase of Judge Dredd. During the 1980s, John Wagner and Alan Grant had already explored the fascistic authoritarianism of Dredd's world in stories about political oppression and pro-democracy terrorism. In America, Wagner overtly took the viewpoint of ordinary citizens living under this despotic system, showing their struggle with pathos and subtlety that took the storytelling in Judge Dredd to a whole new level of maturity and complexity.

In Mega-City One, the Judges are the law – acting as judge, jury, and executioner. But how do the citizens really feel about a system where they are powerless? America Jara and Bennett Beeny grow up as best friends, living a fairly trouble-free life in a dangerous city... bar the odd encounter with a Judge. Time draws them apart, and when they are brought back together, Beeny is a successful singer and America has become involved with a terrorist organisation – with the Judges in its sights!

Retailing at £19.99, America: Lost & Found - The Rediscovered Scripts will be released in hardcover on 30th September and is available to pre-order exclusively from the 2000 AD webshop at shop.2000AD.com