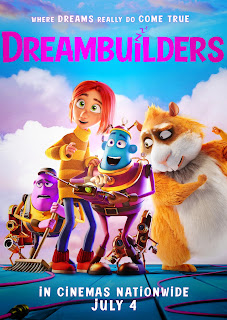 The tagline says "Where dreams really do come true" so was Dreambuilders everything Susan Omand dreamed it would be?...

I really want a dream stage.

That was my abiding memory from this, originally Danish, animation, because I adored the idea that everyone has their own “stage” floating in the void, complete with backdrop, painted scenery, lighting, props and costumed extras with scripts, upon which their dreams are enacted each night. Each stage is managed by a Dream Builder who works a machine that makes the dream feel real when the dreamer is dropped into it. Minna only finds out about hers when a tear in the backdrop reveals her Dream Builder, a blue character called Gaff, at the controls.

But I’m getting ahead of myself here; I should introduce the family in the film. Or, rather, families plural, because Minna is a young teenage girl who has been brought up by her father ever since her mother left to pursue a career in country music (a bizarre choice I’ll grant you, but it gives us a couple of nice songs in the soundtrack courtesy of Alberte Winding who was also the voice actress). Things are going swimmingly and Minna is loving life with just her dad John and her hamster (called Viggo Mortensen!) until John announces that his new girlfriend, Helene, is going to move in with them… with her daughter, Jenny. Now, Jenny is everything that Minna is not. Where Minna plays chess, helps with chores and dances to Mariachi music, Jenny is all about her smartphone, fashion and Instagram followers. Jenny hates casseroles, hates spiders, hates Minna’s jumpers and h-a-t-e-s Viggo Mortensen Hamster! [How could she?! -Ed]. In short, she makes Minna’s life hell and the parents are oblivious. It’s round about now that Minna finds out the truth about dream stages, meets Gaff the Dream Builder and they set out to try and make Jenny easier to get along with by manipulating her dreams so she’ll at least like Viggo Mortensen Hamster and not be mean about Minna’s jumpers. Things however do not go to plan…

Now, this is not a scenario that I have any personal experience of but I can imagine that trying to blend two families together like this will always be fraught with issues and it would have been so easy for the film-makers to make Minna the Cinderella stereotype and Jenny the archetypal evil step-sister. But they didn’t. There are no black and white characters here, everyone has shades of emotion and reaction that make sense in real life, and that makes them both more relatable in the story, with petty jealousies and snide remarks on both sides of their shared bedroom. The story itself I thought was quite nuanced, as one would expect from a Scandinavian film, and it felt in tone like it was a classic book, like Wizard of Oz or Anne of Green Gables, that has been brought up to date even though that’s not the case here. It seemed like there was a lot going on underneath the surface emotionally, with some interesting darker spots, instead of all superficial bright, brash action flick. Saying that, there were a couple of minor plot holes in the action for me, but it didn’t disrupt the overall enjoyment of the film. The animation style was more “cute and friendly” though, making the scary bits not look too scary (“too scary” is also a common theme in Scandinavian storytelling) and, visually, it reminded me more of Inside Out or Wreck it Ralph rather than the more “sophisticated” look of Toy Story et al but that is no bad thing and it suited the story and the characters. I did love the Minion-esque robots that helped to build the dream sets, the well thought out machinery that made the dreams work and the fascinating backstage view, complete with railtracks linking the stages together.

All in all then, a good fun afternoon’s entertainment that will appeal to all and may provide an empathetic connection for tween-age children going through a similar situation. Oh, and I want to revise my first statement - I really want a dream stage AND a hamster called Viggo Mortensen.