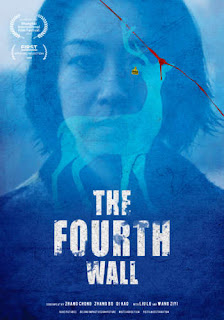 Tony Cross turned to the audience and watched The Fourth Wall from Fortissimo Films...

This is a film that begins as if it is going to be one thing and then becomes something else entirely. Initially you think this might be a social-realist straight drama. No one speaks a line until about ten minutes have passed. We are introduced to our main character, Liu Lu (Lu Liu). She is working on a deer farm. We follow her as she goes about her working day. But one of the deer, No. 42, has gone missing. Liu Lu thinks it has escaped through a hole in the fence, that she tries to mend. This is all ordinary enough.

Then Ma Hai (Ziyi Wang) turns up. Ma Hai is a figure from Liu Lu’s past. There is a story here, an incident. It is New Year. Ma Hai has bought food and drink to celebrate, but there is clearly awkwardness. It is during this awkwardness that Ma Hai explains that he has been experiencing an alternative universe. Where things are not quite the same as they are here. At which point the film takes a turn.

It is still naturalistic in tone, performance, and direction. It is like Sliding Doors has been made by Ken Loach. It is, in performance terms, essentially a two-hander. Apart from Lu Liu and Ziyi Wang there are only five or six other speaking parts and none of them gets more than one or two lines. The story revolves around Liu Lu and some bullies. Initially there appears to be one different parallel world. By the end it seems there was a third. All turning on what happened in that incident. 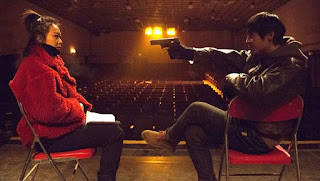 The two central performances are superb. There is something rather fabulous about the restrained and naturalistic performances. Regular readers – or should that be the regular reader – of my reviews will know I am a fan of emotion resisted as opposed to emotion in excess. I find myself affected more by a gentle tear than a mass of weeping. Lu Liu does exceptional work in this regard.

The direction too, by Zhang Chong and Bo Zhang, resists being too showy. You might argue that sometimes it feels a little too theatrical but that is – particularly at one point – meant to be the case. The film has muted, misty tones, apart from the sequences in Madagascar. The Madagascar scenes are beautiful, but there is still a limited amount of vivid colour. It is like the world has had its colours turned down a little.

I really liked it. The way the story meanders from one thing to another, from one world to another drew me in and the two central performances had a gentle power to them. I can not imagine this is the sort of film modern Hollywood would make. The stakes would be bigger I suspect but this is the story of two ordinary people dealing with the consequences of a relatively small incident.