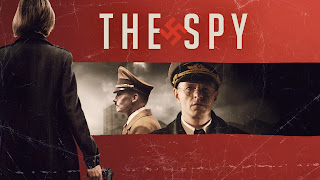 Steve Taylor-Bryant gets to delve back into his favourite topic, history, as he watches the Norwegian WW2 espionage drama The Spy...

The Spy tells the true story of Sonja Wigert (Ingrid Bolsø Berdal), a Norwegian born Swedish film star and diva at the outbreak of the Second World War. Wigert came to the attention of the Reichskommisar Josef Terboven (Alexander Scheer) and was enlisted by the Swedish government to spy on the Nazi’s via her relationship developing with Terboven. Terboven in turn thinks he has enrolled Wigert as a spy against the Swedes but Wigert was always on the side of the Scandinavians.

The casting is The Spy is pretty spot on. Ingrid Bolsø Berdal as Sonja Wigert has the looks and exudes the star quality to make her portrayal of Wigert a fascinating one and, backed up by the likes of Scheer and Damien Chapelle, there is lots to enjoy as the story unfurls with all the actors convincing in their respective roles. The film itself is beautiful to look at and captures the era well and, as a history lesson, I was enthralled and have sought out a copy of the book the screenplay was based upon, Sonja Wigert by Iselin Theien, but herein lies a problem…

Director Jens Jonsson’s The Spy (Spionen) is a tough one to try and sell in a review. It is not because the film is bad, because it most certainly is not, and is not because its subject, Sonja Wigert, is not deserving of having her story told, because she most certainly does deserve her life being taught to a wider audience. The problem arises because the film seems to only appeal to the likes of me who already have an obsession with history and want to learn about significant figures from that history that we maybe didn’t get to know about in school, or to those who are already familiar with the subject and want to see a visual representation of that subject rather than read a text book, or a biography. For a casual viewer, a film about an elegant actress who was also a resistance fighter and a spy need to have maybe more action or more explanation throughout to grab the audience. This sounds like I am trying to have these types of historical films diluted, and I probably am, but not because the films are not brilliant; it’s because the audience don’t have the appetite for a history lesson they once did, which is not only a shame but a failing in society and the education of our children. The modern casual film audience is so spoiled with CGI, and world building, and no discernible plot to have to follow that, when they see a title like The Spy that might appeal to them, they have certain expectations going in that an accurate historical biopic is just not going to meet.

This is a generalisation I know but it’s one that is proving correct time after time. I see so many wonderful films about true characters disappearing from our cinema screens and ending up in the discount DVD section of the supermarket that it is upsetting. The cast deserve better, the filmmakers deserve better.