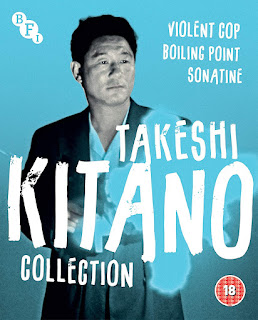 A new compilation of some of Takeshi Kitano's early films comes to Blu-ray this month as part of the BFI's celebration of Japan 2020...

Takeshi Kitano burst onto the scene as a director in 1989 with Violent Cop and quickly established himself as a filmmaker to watch. He continued within the yakuza genre with 1990’s Boiling Point and with Sonatine, released three years later, he gained deserved international acclaim.

As part of the BFI’s major season JAPAN2020, these three films will be released on Blu-ray for the first time in the UK in Takeshi Kitano Collection on 29th June 2020. Numerous extras include commentaries for each film, a documentary looking at Kitano’s cinematic image and more.

Born in Japan in 1947, Takeshi Kitano is a comedian, television presenter, author, actor and filmmaker who has become a cultural icon both in his own country and abroad. He is predominately known in the West for his work as an actor and director on films including Battle Royale, Zatoichi and Hana-bi, the last of which won the Golden Lion at the Venice International Film Festival.

More often known by his stage name ‘Beat’ Takeshi, Kitano has been described as the true successor to legendary director Akira Kurosawa, and it’s hard to imagine greater praise than that.