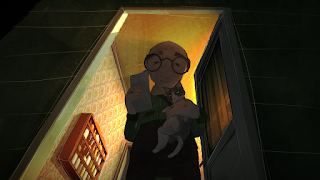 With deliberately major spoilers, lots of block capitals and a warning of descriptions of violently graphic scenes, Susan Omand watched Los Gatos at We Are One Global Film Festival and really REALLY wishes she hadn't...

I make absolutely NO apology for spoiling the hell out of this short film because people NEED to know ahead of time what they're going to see on the screen so they can make the choice whether or not to watch it. I did not get that option because there was no warning. And I would absolutely recommend that you DO NOT WATCH IT. This is not a "reverse psychology" gimmick, this short animation film is traumatising in a bad way; reprehensible, repugnant, gratuitous, badly-judged and, ultimately, pointless because the unexpected and horrifyingly graphic nature of it resulted in me missing the point and the metaphor that the film-maker intended, however misguided that too was.

A street cat meets an old man that will change his life forever. Between bowls of milk and warm cuddles, he feels welcomed by his new owner, but the elderly gentleman has secrets of his own.

There should definitely have been a warning of some kind in the written description of this film, if not on-screen itself, so that viewers like myself, going in "cold," knew to expect some kind of trauma; I am a cat lover and, from that innocuous synopsis above, and from the nice image on the website, I expected this to be a story of a stray cat reluctantly getting taken in by an old man and e.g. changing his (the man's) life for the better - sad, yes, troubling, maybe, informative, absolutely. And a film that I could say was "a hard watch, so maybe not for kids, but worth the effort".

I COULD NOT HAVE BEEN MORE WRONG.

I am not easily triggered or upset. I enjoy reading and watching horror when I know that's what I'm going to get and am in the right frame of mind for it. HOWEVER - graphic and explicit depictions, even in animation, of animal abuse and cruelty ARE NEVER OK, whether or not there is a warning beforehand (and this time, remember, there was NO warning of any kind.) Actually SEEING the man break the cat's leg by twisting it until you hear the crack was absolutely unnecessary and any "point" of the whole film thereafter was negated for me. Apparently, by the way, the point (having gone back to read the comments on the YouTube film after spending a sleepless night, sickened and crying because I was so traumatised by imagery that I still can not unsee) was to show, by the cat running away and then returning after a fight with another cat, that domestic abuse victims always have a choice about whether to stay or leave their abuser - a point that is a) WRONG and b) VERY badly timed, given the current lockdown situation, even if it was true.

As it is, because of the psychological damage this film has provoked, without warning, I feel like I have been violated by NOT being given the choice that the film-maker says everyone has. Am I over-reacting? Maybe. But, had there been an inkling of the fact that animal abuse was involved, never mind a horrific violence that is so graphically shown in the animation, then I never would have watched this.

They say that good art has to provoke a reaction - but this gratuitous shock value is NOT the way to do that. This film has angered and upset me to the level that, not only am I going to actively avoid anything by that film maker in future, I am also unlikely to watch anything else in the We Are One film festival listing, which is a pity, but I genuinely feel that I cannot trust that they will suitably inform their film viewers of possible triggers in their films in future.