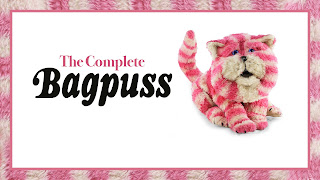 Coming to Amazon Prime tomorrow, thanks to Signature Entertainment, Susan Omand wakes up to watch Bagpuss...

It’s OK, don’t worry, they’re not yet rebooting our favourite pink and white saggy old cloth cat into a hideously garish CGI cartoon that will re-imagine new characters for today, build gadgets and wear hi-vis jackets (yes, Wombles, I’m looking at you). No, instead, we’re getting the absolute joy of all thirteen episodes of the original 1970s series from Oliver Postgate and Peter Firmin to watch all over again on Amazon Prime video! YAY!

Only 13 episodes? I know, I was as surprised as you; it felt like there were loads of them back when I was five and watching them at lunchtimes and I have just had a nostalgia filled week, watching them all again as I sat on the floor in front of the TV, munching my cheese and tomato roll and apple slices and drinking orange squash. And yes, they are still as lovely as I remember them.

For those of you who don’t know [i.e. are not quite so ancient – Ed] Bagpuss is a cuddly toy cat who belongs to a little girl named Emily. Now, Emily owned a shop but the shop didn’t sell things, instead it was a place where she took interesting items that someone had lost and she had found which needed mending or cleaning up. The work is done by the singing mice who live on the Marvellous Mechanical Mouse Organ, with help sometimes from Bagpuss who “thinks” magic stories (sometimes needing a thinking cap) to help put things together. This work is done to the accompaniment of songs and poems from Gabriel, a toad toy with a banjo, and Madeleine, a rag doll, and all overseen by the wonderfully imperious Professor Yaffle, “a carved wooden bookend in the shape of a woodpecker” as he is described in the glorious narration repeated in each episode.

And there is a lot of repetition in each episode, with the same opening and closing monologues each time, but this is a good thing as it helps young children to recognise something, have confidence in the familiar and develop a routine for stopping, sitting and watching. The poems and stories in each episode are fun and informative with a good mix of facts in with the fairy tales, moralistic in some cases but without being preachy, and the songs sung by Gabriel and Madeleine sound like traditional folk songs, complemented by music from the paper rolls of the Mouse Organ and Gabriel’s banjo. The main characters of Bagpuss and his friends are all physical models, painstakingly brought to life using stop-motion animation techniques which must have been so time-consuming to do but the end result looks charming. Both the song and the story in each episode are accompanied by either small paper-cut animations or paintings, beautifully done in ink and watercolour to fit with the gentle nature of the rest of the programme.

I will readily admit that in the *mumble-mumble* years since I first watched the episodes, I had forgotten about quite a few of them. I did remember the ballet shoe and the elephant with no ears (no spoilers though) but I laughed anew at The Mouse Mill which made biscuits and The Frog Princess story which doesn’t turn out quite how you’d think. I was enrapt by the tiny details too, that I had obviously missed first time around – like how the King in one story was called King Frederick 29th, that it was a ragtime tune used in the episode about a rag-made house, or that the mermaids in another story didn’t have shells covering their merbits in the paintings and how this is never mentioned by anyone. As to favourites, I loved the almost Aesop’s fable-like The Owls of Athens, which told the story of how the owls lost their beautiful singing voices through greed, and the story of The Wise Man, who made friends with the turtles rather than eat them in soup. But my absolute favourite story, and it always has been with animation reminiscent of Noggin the Nog and glorious sounds from both pipes and beasties, is The Hamish.

The question is, though, would the series appeal to the under-fives today? To be honest, if you’d asked me a few years ago, even a few months ago, I would have said no. The world had become a bright, noisy, hi-tech, fast moving place with short attention spans and a need for “spoon-fed” entertainment with no imagination needed. Now, though? Now, I think a combination of three things means yes, the series will find a new audience. Firstly, lockdown has given some parents more time to spend connecting with their kids and doing things with them, sparking the imaginations in both; secondly, people are getting more into crafts, baking, sewing etc thanks to Sewing Bees and Bake-offs on TV so are more willing to put time and imagination into creating for themselves; and finally the interest in the environment meaning that people are more receptive to upcycling and reusing, not just “buying to throw away,” so the idea of finding something and mending it or changing it is something young kids will be more used to.

For me, as ever, the nostalgia trip is more than enough. I’m overjoyed to know that these 13 gems of episodes will be available to watch again without any updating, rebooting or general 21st century zhuzhing. After all, as we’re told at the end of every episode:

“Even Bagpuss, when he was asleep was just a saggy old cloth cat, baggy and a bit loose at the seams. But Emily loved him.”