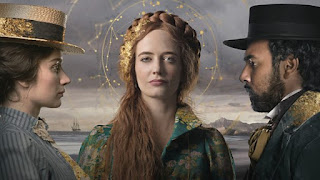 Ahead of the start of the new 6-part adaptation of her Man Booker prize-winning novel on Sunday, the BBC have released an interview with author Eleanor Catton...

Set on the wild West coast of New Zealand’s South Island at the height of the 1860s gold rush, The Luminaries tells an intricately woven, suspenseful tale of love, murder, magic, and revenge.

The story begins in 1865. Anna Wetherell (Eve Hewson) has travelled to New Zealand to forge a new life. On the last day of her voyage, a romantic first encounter with the radiant Emery Staines (Himesh Patel) fills her with great expectations for what lies ahead. But the scheming fortune-teller Lydia Wells (Eva Green) has other ideas for Anna, and lays a trap to ensure that the planned rendezvous between the young lovers never takes place.

Deceived, swindled, and betrayed, Anna’s fortunes begin to fall. She is drawn into an elaborate plot of blackmail, involving opium, gold, shipwreck, fraud, and false identity, which ultimately finds her framed for murder and fighting for her life.

But the bond between these star-crossed lovers is more than mere affinity. Anna and Emery are what is known as ‘astral twins’: they were born at the very same instant, and under the very same sky, which means that they share a single destiny.

When Emery vanishes without a trace, leaving Anna without an alibi for a murder she did not commit, the noose of the plot begins to tighten around her. Faced with the impossible, she must ask: do we make our fortunes, or does fortune make us?


Eleanor Catton is the writer, creator and executive producer of The Luminaries.

Describe the story of The Luminaries.

I’d describe it as an adventure epic. It’s a story that takes place in the wild west of New Zealand in the 1860s in one of New Zealand’s gold rushes and it tells the story of star-crossed lovers who were, by an accident of fate, born at the exact same incident under the exact same sky. And so, in astrological understanding what this means is that they share a destiny. We follow these two lovers, from the moment of their first meeting, through all the trials and tribulations as they are then wrenched apart and then, well I don’t want to spoil the ending but whatever it is that happens to them, happens!


This feels like a very female story, and a very female production team. Was this a conscious decision? And if so, what did this bring to the work?

As a novel The Luminaries is dominated by men, partly in keeping with the gender ratio on the goldfields at the time, and partly because the system of astrology that gives the book its architecture has only two celestial bodies that we tend to define automatically as feminine: Venus and the Moon, who in the story are embodied by Lydia and Anna, respectively.

The show brings these two women, and their relationship, to the fore, and adapts the plot of the novel quite considerably in the process. Actually, the show departs so much from the book that I think of it more as a companion piece than as a straightforward adaptation. I am very proud that the show foregrounds the work of women - not just of the two extraordinary lead actresses, but of the director, producer, and production designer, among many others. 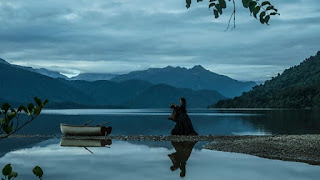 What was the thought process behind bringing Anna Wetherell to the forefront for the adaptation?

The decision was more formal than political. The Luminaries has quite a peculiar structure as a novel, as each of the characters are modelled on one of the figures of the classical heavens, and the plot was dictated by their positions and movements as they really appeared in the skies over New Zealand in 1865/1866. The result, hopefully, is a kind of ever-changing horoscope - strange enough for a novel, but completely unworkable on screen.

The job of the adaptation was to settle on one of the characters as a central point of view. Anna’s journey is in a way the most epic, and so it made sense to choose her as the central perspective to follow. It could easily have been somebody else - except that I’m very glad it wasn’t, for the sheer pleasure and privilege of having been able to spend so much time with Eve Hewson over the course of the story.


How has it been to collaborate with a huge production team, compared with the more solitary experience of writing a novel?

I find the more professional aspect of being a novelist - being in the public eye and so forth - very alienating and exposing, and I loved the sense of shared purpose and shared challenge that comes with being part of a team. I was only really a spectator on set - most of my direct involvement in shaping the story happened in development and then again in post-production - but it was impossible not to be inspired by the sheer concentration of creative energy both on camera and behind the scenes.

Nearly all the actors offered ideas and suggestions, most of all Eva Green. There are several very good plot ideas in episode six that are entirely hers - but ideas came from other departments as well: the script was constantly changing in response to what other people had thought of, and had made. I found that very inspiring. Touching the fabrics in the costume workshop, and wandering the sets while they were being built, and watching extras mill around between takes, I often had to pinch myself to remember that once upon a time The Luminaries was just a vague idea in the back of my mind. 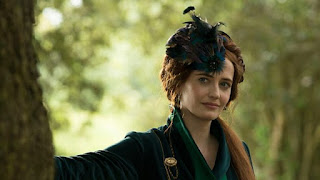 Do you approach writing a novel and a script in a similar way? Or are they very different disciplines?

They feel completely different to me. Screenwriting depends on natural laws in a way that fiction doesn’t - it’s more capacious as a form I think. A piece of fiction isn’t limited either spatially or temporally, but a film or television show is confined in both dimensions. An hour of television, no matter how experimental the storytelling, will always take up exactly an hour of the viewer’s time, and will always take place on a television screen. A novel, even a very conventional novel, can span decades in a paragraph, or pause a scene to go back and explain something, or spend pages describing invisible thoughts and impressions, or employ any number of shifts in point of view that on screen would feel alienating and annoying.

This freedom isn’t always a good thing of course - there is a discipline to screenwriting that a lot of novels could learn from, and film has an emotional immediacy through the score and sound design, not to mention the presence of the actors, that can make it feel more immersive and emotionally affecting than the experience of reading a book. There are many exceptions, but generally it’s true that each form can do things that the other can’t.

The other big difference between them is that a novel is complete, whereas a screenplay, when it’s finished, is still only an architectural plan for a story that will then get rewritten twice over, first in the shoot, and then again in the edit. So a screenplay has to be suggestive: it’s written for the actors and the director and the cinematographer, proposing how the story could be embodied in its final form; it’s not written for an audience.


Do you imagine the characters from the novel in a new way, since you’ve seen them embodied by actors?

They exist separately for me. When I read and write, I don’t really experience characters from the outside. I have more of an internal sense of who they are and how they think and feel. Watching actors is external: you’re looking at them rather than through them. Also I think that even when you believe completely in a character on screen, there’s always a part of you that is admiring the actor’s performance. There’s a marvellous pleasure in that doubleness - to think, at the same time, I’m falling in love with Anna! - and also, Eve is amazing for making me fall in love with Anna! But it’s very different from the experience of reading a book. 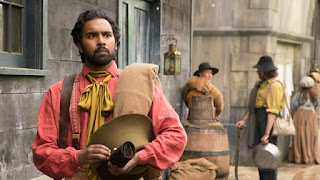 This is a period piece but there are themes which feel very modern. Do you think particular themes of the series will resonate with a modern audience?

A gold rush is a fantasy of possibility, and of total reinvention, that I think almost everybody must have had at some point - especially in a digital age where information is frighteningly permanent, and where your chosen forms of self-expression can box you in as much as they can set you free. But I think any story will feel timely if it is told well.


Why is New Zealand an important back drop to the story?

The West Coast of the South Island of New Zealand, where The Luminaries is set, is rich not only in gold but in greenstone, a treasure that is central to Māori understanding and way of life. Thematically The Luminaries is concerned with the difference between these two minerals, one pure currency, the other pure gift. It wouldn’t have been right to transplant the story elsewhere.

But I think that the character of the country shapes the story in other ways too. One of my uncles once used a phrase that stuck with me: the wilderness of the mind. The idea was that national parks and wild spaces are important even if you never visit them, because simply by knowing that they exist, your imagination is reassured in its own potential wildness, and therefore freed. I think that New Zealand occupies a place like that in the minds of many people. It’s important even if they’ve never been there.


What was the inspiration behind structuring the story on the celestial? Is this a belief system that you follow personally?

For me astrology is more interesting as an interpretive tool than as something to believe in. It has a lot in common with music, a system that is also patterned on a 12 and a 7, whereas we find meaning in astrology through the interactions of seven planets and 12 revolving signs, we find meaning in music through the way that a single octave, composed of seven intervals, interacts with twelve possible key signatures - the revolving circle of fifths.

Who can say, really, why a major chord sounds happy, and why a minor chord sounds sad? I can’t, but I definitely feel satisfaction at a perfect cadence, and melancholy at a plagal one, and I definitely feel uplifted and enlarged when a pop song changes key, and I definitely feel irritated when someone plays a note that’s out of tune. Astrology is very similar: it’s an interpretive system that involves emotional and psychological harmonies that are ultimately mysterious. I have never been astonished to discover anybody’s astrological sign; it’s a piece of information that always makes sense and feels true. It doesn’t really bother me that I couldn’t tell you why.


What would your advice be to any aspiring writers putting pen to paper during lockdown?

Learning how to read yourself as a reader is, in my opinion, the most important skill you can cultivate as an aspiring writer. This applies to watching television as well: don’t just zone out in front of the TV, read what you’re watching and read yourself as you’re reading it.

The Luminaries starts on BBC One on Sunday 21st June at 9pm, continuing on Monday 22nd.