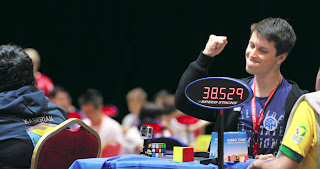 With the documentary coming to Netflix on July 29th, watch the trailer for The Speed Cubers [I bet they don't peel the stickers off and rearrange them - Ed]...

Speed Cubing, which is the competitive sport of solving a Rubik’s Cube in mere seconds, has grown into a worldwide phenomenon in recent years. For nearly a decade in the sport, Feliks Zemdegs from Australia, has reigned unchallenged as the king of cubers, the greatest of all time. That is, until now. The cubing world was stunned when an unknown challenger named Max Park from California took home the Gold medal in 2017 and emerged onto the global stage. Since then, Max’s rise to the top has been swift and steady, save for one obstacle in his way – Feliks. The two have been trading wins and world records steadily, neither one able to truly dominate while the other still competes. But rather than developing into a bitter rivalry, Feliks and Max have instead grown their competitive relationship into a tender yet complicated friendship.

Max is highly autistic and his family has been using speed cubing as a means of therapy for his nascent social skills and emotional development. They would have never guessed that Max’s biggest rival in speed cubing would become his biggest ally in his struggles with autism. Our story finds Max and Feliks on the threshold of another World Championship, both driven to win but both rooting for each other’s success. Between the two friends, though, there can only be one champion. Who will it be? But perhaps more importantly, will their friendship survive the answer?