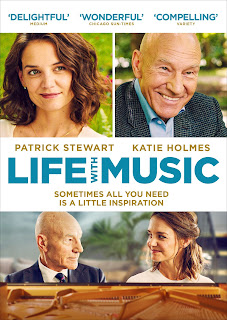 Susan Omand boldly goes for a non-sci-fi Patrick Stewart film and Life With Music, available on Digital Download from 27th July thanks to Blue Finch Films...

If you know me at all, you’ll know that “romantic drama” is not my usual genre of film – give me laughs and explosions any day. However, I was swayed into giving Life With Music a try because of two things in the trailer for it – Sir Patrick Stewart and classical piano music. It did mean that I’d have to put up with Katie Holmes too but I was willing to take the risk. Yes, I will admit, I had a couple of preconceptions going into this film, firstly that Sir Patrick Stewart is excellent in everything and, secondly, that Katie Holmes, well, isn’t.

Surprisingly, I was a bit wrong about both of these things. Sir Patrick is, yes, wonderful, but I’m afraid that I couldn’t shake the Picard stereotype from his character; the latest Picard that is, not the back in the day TNG Picard, the one from the new series that lives in a French Chateau and wanders the countryside and listens to classical music. However, that is my fault rather than his. In Life With Music, Stewart plays Henry Field, a classical concert pianist who, after a family tragedy, stopped playing for more than two years and now gets crippling stage fright every time he has to play in public, despite the best efforts of his agent Paul, very ably played by Giancarlo Esposito who was one of the highlights of the film for me. Katie Holmes is Helen Morrison the journalist from New Yorker magazine who comes to review a concert and to persuade Field to give her an indepth interview for her article on his life. But first, of course, Morrison has to help Field overcome his demons and reconnect with his music. As a magazine journalist, Holmes was surprisingly believable, walking the line between professional interest and compassion well, and she didn’t come across as either overly saccharine or uber feisty in a part which could have gone either way. That said though, there was absolutely no “romantic” on-screen chemistry between them at all, there was always a layer of polite standoffishness from both sides which, according to the plot, shouldn’t have been there. 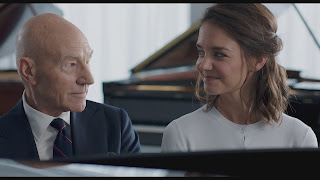 I was going to start this paragraph with the phrase “talking of the plot” but, to be honest, the less said about the clichéd storyline the better in my opinion. I guessed the main plot twist within the first few words of Katie Holmes’ opening voice-over and the story dutifully followed that well-worn path. However, as I said at the start, romantic drama isn’t my thing so it could be that this is what the target demographic wants and who am I to argue? So, in short, yes it does what you think it will. I also had a bit of an issue with how it was filmed, with very distracting depth of field shifts in the middle of dialogue, but I realise that I’m probably picking at a scab now - although it did annoy me. And don’t get me started on the dodgy VFX, especially noticeable in the hotel long-shots when there are meant to be lights at the windows but they look like CGI yellow squares… see, I said don’t get me started.

There was, however, one majorly saving grace to the film, for me, and that was the music. A stunning array of classical piano pieces underpinned the soundtrack both on and off stage; from Bach to Beethoven, Chopin to Schuman, Scriabin to Smetana, the film was packed with stunning piano music. So for that, if nothing else, this film is at least worth putting on in the background to listen to the glorious playing of the real piano maestro Serhiy Salov while you’re doing something else.