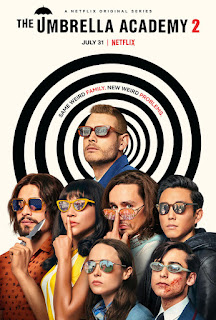 The full trailer for Season 2 of The Umbrella Academy is here! Here's what we know so far...

Five warned his family (so, so many times) that using his powers to escape from Vanya’s 2019 apocalypse was risky. Well, he was right - the time jump scatters the siblings in time in and around Dallas, Texas. Over a three year period. Starting in 1960. Some, having been stuck in the past for years, have built lives and moved on, certain they’re the only ones who survived. Five is the last to land, smack dab in the middle of a nuclear doomsday, which - spoiler alert! - turns out is a result of the group’s disruption of the timeline (déjà vu, anyone?). Now the Umbrella Academy must find a way to reunite, figure out what caused doomsday, put a stop to it, and return to the present timeline to stop that other apocalypse. All while being hunted by a trio of ruthless Swedish assassins. But seriously, no pressure or anything.

With 10 episodes titled as follows:

The Umbrella Academy Season 2 drops on Netflix on July 31st. Here's the trailer

By the way, if you need a re-cap, the cast are here to help with that too:

WHERE ARE THEY NOW?

Blasted back in time to 1960s Dallas, the scattered siblings build new lives for themselves — until a new doomsday threat pulls them back together. Warning there may be spoilers ahead.

We find Luther working as a driver for the owner of a burlesque bar, who becomes a sort of father figure for him. When he’s not looking for his family, or racing with Five to stop the nuclear doomsday and get back to 2019, he’s using his super strength in underground boxing rings.

Diego has been locked up for delusional claims about JFK being assassinated. He breaks out of the hospital with his new friend Lila, for whom he starts to develop feelings. Per usual, he wants to save both the day and the president all on his own to prove to the family he has worth and can make a difference in the world.

Allison lands during the height of the Civil Rights Movement, thrown into a segregated and racist American south that she now must endure, in addition to the loss of her voice and being separated from her siblings. As her time in Dallas progresses, she finds new purpose in the fight for justice, until reuniting with her family pulls her back into their fight against the apocalypse.

We find Klaus as the leader of a free-loving spiritual cult. Despite fame, fortune, and thousands of devotees, Klaus is still battling his inner demons. As they continue to struggle with their co-dependent relationship, he and Ben experiment even further with their “combined” powers.

Five is the last to land in Dallas, and arrives to find another apocalypse. Upon learning this Doomsday is the result of the family’s actions, he once again uses his intellect and powers to wrangle his siblings to try and save the world.

Everyone’s favorite ghost is back, haunting Klaus with his conscience, wisdom, and sense of humor. But this time, he’s determined not to be invisible to the ones he loves, willing to go further than ever before to make his presence known.

Vanya’s memory has been erased in the time jump. While she’s stuck looking for answers about her past, she falls for an unexpected love interest. Vanya is taken in by a family, whose son she forms a unique bond with. Before long she (re)discovers her mysterious ability, which helps Five track her down and reunite her with the siblings.