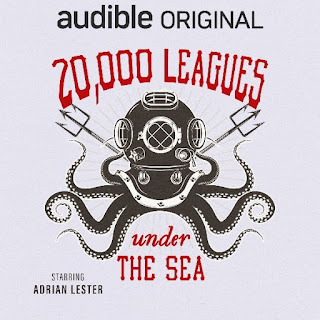 A new full-cast, five-part audio adaptation of the classic Jules Verne novel 20,000 Leagues Under the Sea is now available on Audible...
Press Release

Starring Adrian Lester as Captain Nemo, this Audible Original drama voyages across the seas on board the USS Abraham Lincoln in pursuit of a mysterious monster that has been terrifying unsuspecting ships, in an expedition to hunt this creature down before more people are injured or killed.

Amongst the crew are Professor Pierre Aronnax (Terry Molloy), who wants to be the first person to identify the creature, believing it to be nothing more than an oversized Narwhal. He’s joined by Ned Land (Clive Mantle), a Canadian harpoonist, believed to be the best in the world.

Brought onto the USS Abraham Lincoln to kill the creature, Ned has a secret - his love was on a previous ship attacked by the monster (as was he) and died deep in the bowels of the ship, and he wants revenge.

Also on board is Constance Boyd (Carla Mendonca), an agent for the fledgling and secret Office of US Naval Intelligence, sent on her mission by J.D. Hobson (Michael Brandon) and Robert Locke (Barnaby Eaton-Jones).

After a long search, the ship -driven onwards by Captain Farragut (Ben Perkins) finally encounters the beast, but during the attack our three crew members are thrown into the water.

As they cling on for life to their surprise they discover the monster to be an advanced technologic masterpiece, the Nautilus, a submarine unknown to man, commanded by Captain Nemo, played by Adrian Lester OBE (The Day After Tomorrow, Primary Colours, Hustle).

An enigma, a man without a nation, who’s declared war on mankind by attacking ships that cross his path, our story truly begins when we meet Nemo and discover he’s not the monster that he’s made out to be. 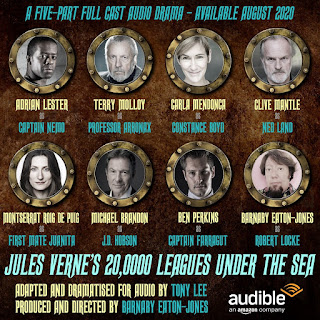 This production was entirely recorded remotely, due to the ongoing pandemic.

Clive Mantle (Ned Land) said "It seems to me to be a very wondrous and dark art, that of splicing remotely home recorded artistes into one seamless and technically breath-taking soundscape. I am genuinely impressed with the skills of the creative team in realising this mammoth undertaking. Bravo."

Terry Molloy (Professor Arronax) added “I was delighted when I was asked to play Professor Arronax in this new audio production of ‘20,000 Leagues Under the Sea’. And doubly delighted, as it gave me the opportunity to use my newly assembled ‘Home Studio’ in a bedroom of my cottage in Norfolk, (a response to the pandemic lockdown). Being able to work at my own pace, recording just my dialogue for the scenes I was in and with no travel involved, meant that I could work in my pyjamas if I wished!”

Montserrat Roig de Puig (Juanita) also found home-recording inspiring, “I saw 20,000 Leagues Under The Sea when I was a child and the most formidable thing for me was that a lot of the action takes place inside the Nautilus submarine. In my little home studio, I felt a little like I was trapped in my own submarine too! So, I used this feeling for my character. The story is a fantastic one and I had so much fun doing it. As a memento of this experience, since this was my first recording from home, I called my recording studio the Nautilus!”
The classic book was adapted by Tony Lee for this production and directed and produced by Barnaby Eaton-Jones.

Tony Lee said “When Barnaby asked me if I was interested in adapting Jules Verne, I never realised how much research I’d be taking on! From differences in translations to additions from earlier works, I did my best to create an adaptation that has a loyalty to all variations of the book, as well as the character of Nemo himself.

It was an utter joy to write - and both Barnaby and my script-editor at Audible, Linda Nagle made me sound way better than I do!”

Barnaby Eaton-Jones (Producer/Director) added “It was a real joy to turn Tony Lee’s brilliant adaptation of Jules Vernes dense text into something that honours the book’s sometimes educational tone but also whips up the action and adventure that is in there too. There’s something deliciously enigmatic about Captain Nemo in this novel, and Adrian Lester gives him that perfect amount of detached air but with the cracks in the cool veneer showing more and more as the story continues.

"Audible used this as a ‘test’ run for a full-cast recording remotely and I was chuffed and humbled to showcase how it could be done successfully. Recording remotely is not a new thing for me, due to productions where some of the actor’s schedules haven’t married up, and it’s actually a way of working that requires more direction in the edit – where you are melding the performances together after discussing how you want scenes and characters to flow during each section.”

YOU CAN PURCHASE THE 5-HOUR EPIC HERE (CURRENTLY ON SALE, FOR MEMBERS, FOR THE NEXT 12 DAYS):