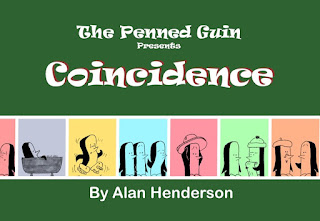 Susan Omand gets a sneak peek at the latest Penned Guin book by Alan Henderson in exactly the same week as it starts crowdfunding on Kickstarter. Coincidence?...

I've been a fan of the punning penguins for several years now [read Susan's reviews of previous books here - Ed] so I was excited to hear that a new collection of Penned Guin comic strips was coming and eagerly opened my preview copy to see what was in it... and... (you will get this joke once you see the first strip in the book)
...yes, OK, I laughed. Quite a lot actually. The new book is comfortingly familiar with over 180 strips crammed into 100 pages and the wee monochrome maniacs are, mostly, in top form with Dad jokes and puns galore. Although there is less of the purely visual humour that I was so fond of in previous books, there's still a lot to raise a smile. The cast of characters has expanded somewhat for this edition too. As well as the main guins, there's also a lot more appearances from the chicks this time out, which allows for some great parent/child jokes and playground puns. I also loved the addition of some ecumenical humour this time which stayed on the right side of funny, however the "fat and ugly" jokes, ironically, wore a bit thin for me after a while. But that is a very minor quibble indeed and may well be me just being over-sensitive about my lockdown belly.
The one thing I would have loved to have more of in the book, though are Alan's brilliant re-imaguinings of classic paintings. There are three scattered throughout the pages of this one and they are seriously brilliant, worthy of any gallery wall - especially the Guin with a Pearl Ear-ring.
Anyway, have a look at some of the other strips that are included in the book:

All in all then, Coincidence is another Penned Guin classic to add to the ever growing collection. The best way to get your flippers on a copy, because of the distinct lack of physical comic-cons this year, is to back the Kickstarter which launches today (Saturday 8th August) and runs til the end of the month. As well as this new book, you can also p-p-p-pick up a few tasty perks, like books from the back catalogue or the original art of strips from this new book. This time round the campaign also features your opportunity to get a limited edition t-shirt that will not be available through other means, featuring the face of Che Guinvara. A collector's item indeed, so we would advise getting two - one to wear and one to keep for posterity!

You can find out more and support The Penned Guin: Coincidence on Kickstarter here: https://www.kickstarter.com/projects/1136825457/the-penned-guin-coincidence