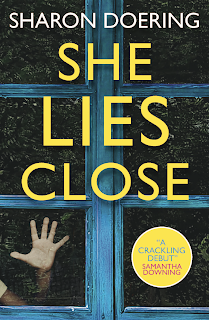 A compulsive debut thriller about motherhood, obsession and the lengths we would go to protect the ones we love, Titan Books announce the publication next month of She Lies Close by Sharon Doering...
Press Release

“I keep seeing Ava’s face behind Leland’s window. Her brown curls.
Her tiny palm. Her empty eyes. Her parted lips.
What did she want to tell me?”

Five-year-old Ava Boone has been missing for six months. There are have been no leads, no arrests, no witnesses. The only suspect was quiet, middle-aged Leland Ernest.

And Grace Wright has just bought the house next door. Recently divorced, Grace uprooted her two small children to start again and hopes the move will reset her crippling insomnia. But now she understands bargain-price for her beautiful new house.

With whispered neighbourhood gossip and increasingly sleepless nights, Grace develops a fierce obsession with Leland and the safety of her children. Could she really be living next door to a child-kidnapper? A murderer?

With reality and dream blurring more each day, Grace desperately pursues the truth – following Ava’s family, demanding answers from the police – and then a body is discovered…


She Lies Close is a taut and addictive psychological thriller from a new rising star of the genre. Sharp, snappy and unpredictable, Doering expertly creates a deeply unsettling atmosphere as she explores motherhood, mental instability and obsession.

Sharon Doering lives in the Chicago area with her husband, Marc, their three kids, and a peculiarly civilized dog, Indy. In her other life, she was a science professor, a biotech stock analyst, and a xenotransplantation researcher. She has also been a good waitress, a mediocre bartender, and a terrible maid. Sharon is currently working on her next novel.
Image - Titan Books
She Lies Close is published by Titan Books on 8th of September
Email ThisBlogThis!Share to TwitterShare to Facebook