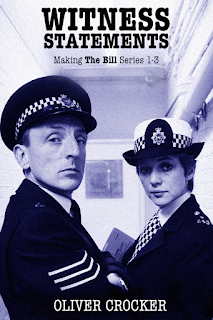 On the 37th anniversary of the pilot episode, Chinbeard Books (in association with Spiteful Puppet) announced a new unofficial guidebook that will take fans behind the scenes of the first three series of The Bill...
Press Release

On the 16 th of August 1983, the UK saw the broadcast of Woodentop – an episode in the Thames Television series Storyboard. This would become the pilot episode of the incredibly long-running police procedural series The Bill.

Over 40 cast and crew have shared their memories of working on all 35 of the original hour-long episodes, detailing how this groundbreaking series was created. These in-depth interviews also reveal how these innovative creatives, many being interviewed for the very first time, began their careers in television production. Twenty cast members have shared their memories, alongside key figures from behind the scenes sharing their production tales. A full list of contributors for this book, the first to be published about The Bill in over a decade, will be announced soon.

Witness Statements also features rare and previously unreleased behind the scenes photographs, plus viewing figures for selected episodes published for the first time!

You can pre-order Witness Statements, which will be released later this year in partnership with Spiteful Puppet, right now by clicking HERE (for the special price of £9.99, below the RRP of £12.99).

Oliver Crocker has presented The Bill Podcast since 2017, recording over 50 episodes of in-depth interviews with the stars of The Bill. The Podcast has been played over 125,000 times and has been nominated for two British Podcast Awards.

As a researcher, Oliver’s television credits include BBC2’s Something for the Weekend and ITV’s This Morning, plus the DVD releases of classic police drama series Dixon of Dock Green and Z Cars.

His first book TV tie-in book, the critically acclaimed All Memories Great & Small, features interviews with 60 cast and crew of the BBC series.

Chinbeard Books is an independent publisher with a solid reputation for releasing TV tie-in books celebrating and extending cult programmes. Their acclaimed catalogue includes guidebooks, anthologies, biographies, and new adventures for Captain Scarlet, Doctor Who, Robin of Sherwood, and The Saint.
Image - Chinbeard Books
Email ThisBlogThis!Share to TwitterShare to Facebook