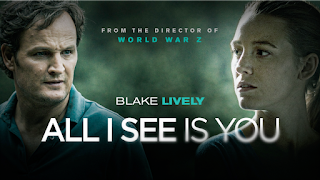 Coming to Amazon Prime next week, thanks to Signature Entertainment, Steve Taylor-Bryant saw All I See Is You...

Blinded since childhood when a hideous car-crash cost her parents and her eyesight, beautiful Gina scarcely leaves their home in exotic Bangkok, depending entirely on her attentive and doting husband, James, who is her everything: her protector, her guide, and the sole intermediary with the outside world. And then, unexpectedly, a cutting-edge but highly experimental cornea transplant promises to restore Gina's vision, at least to her right eye--and all of a sudden--an entire realm of unexplored colours and senses gradually begins to unfold before her. As a result, Gina will see her husband and her unknown reflection in the mirror for the first time, as a bizarre and unprecedented feeling of empowerment slowly takes over. But, are things as James says? And what happens now that life isn't quite as Gina had imagined?

You can read for yourselves in the synopsis above All I See is You sounds like a great concept to explore, a deep dive into the emotional toll certain disabilities can take on a relationship, and how maybe the power shifts one way or the other when a treatment is undertaken. Unfortunately, the film is nowhere near as good as the synopsis. Whilst I don’t want to call it bad outright, it is certainly one of the more disappointing films I have seen for a while because it promised so much but delivered next to nothing. The main problem I found throughout the entire film was that it didn’t ask enough questions and, even when it did ask some, it almost refused to answer them leaving bland characters with little or no depth to them and me asking the question 'why I should care at all?'
A lot of the early scenes from Gina’s point of view start off in a glorious artistic way full of blurs and smidgens of colour but this soon becomes overused and does nothing to drive a narrative, or to build a character. It just seems like style over substance on the part of a filmmaker completely out of touch with his source material, which is odd because director Marc Foster usually makes very good films (Monsters Ball, World War Z, and I know I am alone in this opinion, but the awesome Bond adventure Quantum of Solace) and he is also a co-writer on this script so you would hope that if anyone knew what they were doing, it would be him.

Blake Lively tries a bit to bring something to her portrayal of Gina but, as the film tries to decide whether it is a drama, a sexual thriller, or an arthouse project, Lively just seems to be fighting a losing battle. The usually dependable Jason Clarke wanders about like he’s never acted before, maybe if there was something substantive in the story for him to work from he would have come across better as James, but in the end I just tired of him and didn’t care what happened to him. I was excited to get a glimpse of Danny Huston as the surgeon, as he normally comes into a film and steals a scene or two or rights a wrong of some kind, but not even his appearance could save this.

What should have been an epic deep dive into disability and how it affects a family, what should have been a project that asked a million questions and had a good go at answering as many of them as it could, just couldn’t live up to its grand ideas and eventually found itself wallowing in mediocrity and wasted opportunities.
All I See is You gets a digital release soon but honestly do not waste your time, you will end up never wanting to see a Foster, or a Lively, film again.
Signature Entertainment presents All I See is You on Amazon Prime August 14th
Follow Steve on Twitter @STBwrites
Image - Signature Entertainment.
Email ThisBlogThis!Share to TwitterShare to Facebook