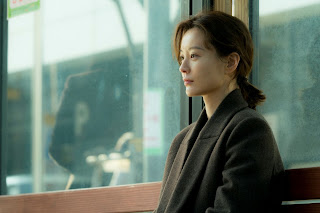 The London Korean Film Festival 2020 presents their only teaser screening this year, the UK Premiere of Kim Ji-young: Born 1982 + Introduction at Genesis Cinema on Thursday 10 September. Watch the trailer...

Based on the international bestselling book by Cho Nam-joo, hailed as one of the most important feminist novels in Korean. Kim Ji-young: Born 1982 was the first Korean book in nearly a decade to sell more than 1m copies. To date it has been translated into 18 languages, and has also helped ignite a women’s rights movement in Korea and beyond.
In a faithful adaptation, the film raises the same important questions about the societal role of modern women. Megastars Jung Yu-mi and Gong Yoo are reunited after lead roles in Train to Busan, with Jung Yu-mi winning a Grand Bell Award for her performance as the title character.
Kim Ji-young is an ordinary Korean woman in her 30s, struggling to cope as a full-time mum and housewife. Although being married to the man she loves and raising a baby girl have proved to be more challenging than expected, Ji-young believes she is utterly content.
However, her husband, Dae-hyeon is worried about her. He turns to a psychiatrist as life appears to hit Ji-young harder than she realises, as she switches personas to mimic her mother, as well as her best friend who died while giving birth, and her late grandmother.
London Korean Film Festival 2020 Teaser Screening 'Kim Ji-young: Born 1982' will screen at Genesis Cinema, Thursday 10 September 2020 with a special introduction from Guardian Columnist Sarah Shin.