Film - The Woman in Black 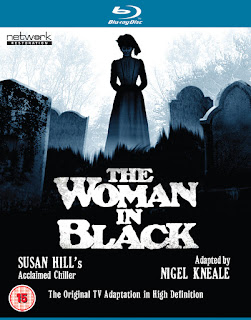 With the Blu-ray release of Nigel Kneale's adaptation of The Woman In Black out now, here's a look at some more spooky screen adaptations of Gothic literature...

Since its initial broadcast on ITV in 1989, Nigel Kneale’s spine-tingling adaptation of Susan Hill’s gothic novel The Woman in Black has been a firm favourite among fans of the spooky and macabre. But despite its well-earned reputation, the film has been as elusive as a wandering malignant spirit and unavailable commercially in the UK.

But fans of this fear-inducing film can rejoice because now, for the first time ever, The Woman in Black is creeping onto a restored special edition Blu-ray. To celebrate the re-apparition of this chilling classic, we’re gazing back into the past at some of the spookiest screen adaptations of gothic literature.

Although Universal Studios had made the foray into gothic horror with its two Lon Chaney silent classics The Hunchback of Notre Dame (1923) and The Phantom of the Opera (1925), Dracula was the film that set the wheels in motion on the studio’s cycle of monster movies, adapted from gothic texts. The film is of course based on Bram Stoker’s novel Dracula (1897) but also more directly on a 1927 stage production in which the titular bloodsucker was played by Hungarian actor Bela Lugosi, with Lugosi being pinched by director Tod Browning to appear in his Universal monster classic. Browning’s film was a huge box office success, initiating a long-run of horror pictures based on classic monsters often led by Lugosi and also Boris Karloff in the studio’s many Frankenstein movies. With its lavish spider-web riddled sets, buckets of spooky atmosphere and a commanding central performance from Lugosi, Dracula is an undying classic of horror cinema. We bid you welcome...

Alfred Hitchcock’s Best Picture Oscar-winner Rebecca was the second of three adaptations the British master of suspense made from novels by celebrated author Daphne du Maurier - the other two being Jamaica Inn (1939) and The Birds (1960). Starring Laurence Olivier and Joan Fontaine, the film weaves a tale rich in gripping suspense and eerie atmosphere, as charming aristocrat Maxim de Winter (Olivier) invites his insecure newly-wed (Fontaine) to his grand seaside manor, where their life together is haunted by the cherished memory of Maxim’s deceased first wife Rebecca. Simmering with darkness and romance, and bolstered by excellent performances from George Sanders as Rebecca’s acerbic cousin Jack and Judith Anderson as the cold housekeeper Ms. Danvers, Hitchcock’s masterpiece is a timeless adaptation of one of the great gothic novels of the twentieth century.

Hollywood star Gene Tierney and soon-to-be horror veteran Vincent Price teamed up for a dark tale of doomed romance in Joseph L. Mankiewicz's Dragonwyck. Set in late nineteenth-century Connecticut, Tierney plays Miranda Wells, an aspirational farmgirl who receives a letter from wealthy landowner Nicholas Van Ryn, a distant relative not related by blood. Nicholas invites Miranda to live with him at his country estate, where she discovers a new life of luxury, soon falling for his charm and sophistication. But a growing unease about Nicholas’ character starts to emerge, as Miranda increasingly spends her days in isolation in the grand manor house. Based on the novel by Anya Seton from 1944, Dragonwyck shows Price at his creepy best as the twisted landowner and creates a heavy atmosphere of doom and gloom as Tierney slowly discovers her husband’s dark secrets. One of classic Hollywood’s very best gothic yarns.

The late Victorian-era ghost tale The Turn of the Screw (1898) from American writer Henry James served as the basis for Jack Clayton’s terrifying British horror tale The Innocents. Deborah Kerr plays Miss Giddens, the recently-recruited governess looking after two young children at the isolated Blye Manor. Soon things begin to go bump in the night as a troubled spirit haunts Miss Giddens and her young subjects, and the house’s dark mystery is slowly revealed. Co-starring Michael Redgrave and Peter Wyngarde, from a screenplay adapted by Truman Capote and shot by British horror stalwart Freddie Francis, The Innocents is a classic slow-burn ghost story full of white-knuckle fear that will have you keeping the lights on well into the night. Fans of Netflix’s The Haunting of Hill House (2018) are in for a shocking treat soon when the series’ follow-up moves its attention to Bly Manor, proving this is one ghost story that just won’t die. “Don’t be frightened, it was only the wind my dear...”

The 60s were a golden era for British horror, with Robert Wise’s The Haunting landing in cinemas just two years after The Innocents. A classic ghost story to its core, much like its predecessor, The Haunting was based on Shirley Jackson’s acclaimed novel The Haunting of Hill House (1959) and tells the story of a large country house with a deadly history and a malign effect on anyone who enters. When Nell (played by Julie Harris) arrives at Hill House to assist Dr Markway (Richard Johnson) with an investigation into supernatural happenings at the troubled dwelling, spooky things start to happen to Nell and the rest of the doctor’s small handpicked team. Much-loved, this monochrome nightmare has been named by Martin Scorsese as one of his favourite horror films of all time, while Steven Spielberg calls it one of the seminal films of his youth. For blood-curdling, fear-inducing terror and suspense, look no further than this 60s horror masterpiece.

Atmospherically directed by BAFTA-nominated Herbert Wise and starring Adrian Rawlins (Harry Potter franchise, Chernobyl) as the unfortunate young solicitor and Pauline Moran as the terrifying apparition, this unsettling drama remains a high watermark for ghost story adaptations on British television and still retains its significant potential to shock. When a friendless old widow dies in the seaside town of Crythin Gifford, a young solicitor is sent in to settle her estate. Following cryptic warnings from the locals regarding the terrifying history of the old woman's house, he soon begins to see visions of a menacing woman in black… Unseen for decades, Nigel Kneale's chilling adaptation of Susan Hill's best-selling novel was first broadcast on ITV in 1989 and has been painstakingly-restored by Network's award-winning in-house restoration team in high definition from original film elements for a long-awaited release.