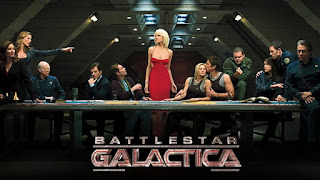 The BBC is showing the cult sci-fi series reboot Battlestar Galactica on BBC Two from next month and is bringing it to BBC iPlayer as a box set...

Originally broadcast between 2004 and 2009, every episode of the critically acclaimed show will be available to watch on iPlayer from 5 September, when the series will begin being broadcast on BBC Two at 9.45pm.

One of the most highly regarded science-fiction shows ever, Battlestar Galactica is set in a distant star system where humanity is brought to the brink of extinction from a nuclear attack by a race of artificial lifeforms called Cylons. The surviving humans are hunted across space as they try to escape the relentless pursuit of the Cylons while searching for a new place they can call home: the legendary lost colony Earth, if it indeed exists at all.

The series, produced by UCP, drew acclaim for its strong characters and excellent cast - which includes Edward James Olmos, Mary McDonnell, Katee Sackhoff, Jamie Bamber, James Callis and Tricia Helfer - but also for its compelling storylines and the depth and quality of its writing. Themes such as war, religion, ethics, and justice are explored with a rare degree of gravity and sophistication.

Dan McGolpin, controller of BBC iPlayer, says: “Battlestar Galactica is regarded as one of the best sci-fi series ever made and it holds appeal for anyone who loves to immerse themselves in top quality drama. It joins Fort Salem, Heroes, Devs, His Dark Materials, Doctor Who and Torchwood to form an incredible range of science fiction and fantasy series available on demand on BBC iPlayer.”