TV - Roald & Beatrix, the tail of the curious mouse 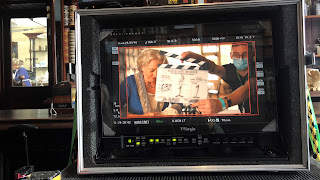 It's exactly four months to Christmas... or should that be Chrismouse?...
Press Release
Filming has begun on a new Sky original Roald & Beatrix, the tail of the curious mouse, a heart-warming Christmas film inspired by the true story of when a six-year-old Roald Dahl meets his idol Beatrix Potter. A magical story of what really can happen when you are brave enough to follow your dreams…
Joining Dawn French (Vicar of Dibley) who plays Beatrix, the cast will include Jessica Hynes (W1A), Rob Brydon (The Trip), Alison Steadman (Gavin and Stacey), Nina Sosanya (Brave New World), Bill Bailey (In The Long Run) and Nick Mohammed (Intelligence). The uplifting 90-minute comedy drama airing on Sky One and streaming service NOW TV will form the highlight of Sky’s festive schedule.

Written by Abi Wilson, Roald & Beatrix, the tail of the curious mouse will be narrated by John Hannah with music scored by composer Murray Gold (Doctor Who). Produced by Hartswood Films (Sherlock, Dracula) for Sky Studios, the film will blend live action camera work, stop-frame animation and puppetry together to bring to life the vivid imaginations and magical worlds of these two inspiring and renowned children’s authors.

In the Sky original, the famed author Beatrix Potter (French) is coming to the end of her career. With her publisher (Sosanya) hounding her for her next draft, she’s unable to concentrate and has had enough of writing children’s books. It’s not just her motivation that she has lost, her optometrist (Mohammed) has recognised she has failing eyesight. With Christmas approaching, Beatrix is pressured, feeling increasingly out of touch with her readers, not to mention the trespassing fans and jovial door-knocking carol singers. Her Cumbrian farm and ever-growing Herdwick sheep collection, her long-suffering husband William (Brydon) and disobedient animals including much loved pig called Sally, act as her only real comfort as she looks for inspiration and resists taking the easy way out with her Publisher.

Two hundred or so miles away in Wales, life is changing for an anxious young boy called Roald. (Harry Tayler). Having recently lost his older sister and now his father, the once happy six-year-old has found solace and comfort in books. The beloved tales of Peter Rabbit and Jemima Puddle-Duck fill his mind, distracting him from the funeral, sadness and the revelation that he might be sent to boarding school. Wanting to run away, he is encouraged by his mother Sophie (Haynes) to follow his dreams and visit his hero Beatrix Potter. Roald pushes his anxiety aside and they set off on his first big adventure. Their extraordinary journey is filled with unpredictable and humorous characters (Steadman & Bailey) all of whom ignite Roald’s imagination and provide comfort to his grieving mother. The dream of meeting his favourite author is eventually realised and their very special encounter proves to be both a magical and life changing moment for them both.

Jon Mountague, Director of Comedy, Sky Studios, said: “Roald Dahl taught us ‘a little magic can take you a long way’. This Christmas, Sky presents the magical tale of how a boyhood Dahl met his idol Beatrix Potter. With Dawn French leading an all-star cast this surprising story, inspired by a real life encounter, is a tale as much for our times as yesteryear. Produced by Hartswood, it’s a giant peach of a Christmas gift.”

Elaine Cameron, Producer, Hartswood Films, said: “This film follows a joyous and magical journey involving two of Britain’s most loved children’s authors. As filmmakers in the middle of a world-wide pandemic, we are similarly embarking on a journey – quite unlike anything any of us have ever experienced. The optimism and resilience of the cast and crew and the bravery of Sky to back us to the hilt, is as inspiring to me as a producer as the story itself. We are delighted that Abi’s wonderful writing has attracted such a stunningly funny cast.”

Produced by Hartswood Films for Sky Studios, Roald & Beatrix, the tail of the curious mouse was commissioned by Jon Mountague, Sky Studios’ Director of Comedy and Zai Bennett, Sky’s Managing Director of Content. Produced by Elaine Cameron, directed by David Kerr (Inside Number 9, Jonny English Strikes Again) and written and exec produced by Abi Wilson, the show is executive produced by Sue Vertue and Dan Cheesbrough for Hartswood Films and Jon Mountague for Sky Studios. The film will be distributed internationally by NBCUniversal Global Distribution. The production is also pleased to be supported by Creative Wales, shooting on location in Wales and at Seren Studios in Cardiff.

Dafydd Elis-Thomas Deputy Minister for Culture, Sport and Tourism “I’m delighted that Creative Wales has been able to support this production, which promises to be a magical adventure based on two authors which have strong links with Wales. We are pleased that Wales is the location of choice for this production from Hartswood Films, who have a strong track record in the delivery of high quality drama in Wales. This production provides a timely and welcome boost to the skilled crew and supply chain returning to work on such an exciting, prestigious project.”

Roald & Beatrix, the tail of the curious mouse will air on Sky One and streaming service NOW TV this Christmas.
Image - Sky
Email ThisBlogThis!Share to TwitterShare to Facebook