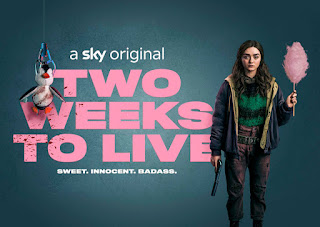 Ahead of Season 1 coming to Sky One next month, read an interview with the star of Two Weeks to Live, Maisie Williams...
Press Release
Two Weeks to Live is a darkly comic tale of love and revenge born from a harmless prank that goes terribly wrong. Kim (Maisie Williams) is a strange young misfit who was just a little girl when her father was murdered. After his death, her mother Tina (Sian Clifford) spirited her away to a remote life off-grid in the Scottish wilderness. Fearing for her safety, Tina trained Kim in combat and kept her from the outside world with exaggerations and lies about the dangers of modern life.

Now 21, Kim’s determined to experience everything she’s missed out on and sets off into the real world on a secret mission to honour her father’s memory. Things get complicated when she meets hapless brothers Nicky (Mawaan Rizwan) and Jay (Taheen Modak). When a drunken prank goes spectacularly wrong, Kim’s rush to exact her revenge ends in violence. Bound by the mess they’ve created, the trio set in motion a chaotic series of events that puts all their lives in danger. Hunted by the mysterious Brooks (Jason Flemyng) and Thompson (Thalissa Teixeira), associates of crime boss Jimmy Davies (Sean Pertwee), Kim must reunite with her controlling mum if they are all to survive.
Created and written by Gaby Hull, the series is directed by Al Campbell and will be available on Sky  One from 2nd September.

This was originally scripted as a movie, why do you think it works better as a TV show?

I think people will love to get to know these characters and spend a lot more time with them. There was enough story that we could spread it across multiple episodes and by keeping them to around 30 minutes, I think it makes them really strong and punchy, funny and tight. There’s also an interesting cat and mouse chase that lends itself really well to an episodic structure so you can have these little cliffhangers in the middle too.

Tell us about Kim and what she’s all about

She is entering the real world for the first time and she is almost like an alien really, the way that she sees the world. There are so many things that go on in the world that we think are normal, but she questions them constantly. She’s like a kid in a candy shop. She’s very excited by what she’s learned but she also realises that the outside world is difficult and not all it’s cracked up to be.

Tina raised Kim alone in the middle of nowhere and because of that, they’ve got a very tight relationship, but I wouldn’t necessarily call it a very typical relationship. Sian [Clifford] really took the role of Tina and turned it into something beautiful. Tina almost looks at Kim like a protegee, and although that’s been her reality her whole life she realises once she gets into the outside world, she wants something different.


How does Kim evolve as the series progresses?

She’s always felt really independent and very capable but emotionally, she’s realising that being alone is going to be a big step for her and although she can probably handle herself physically, mentally she’s facing huge battles every day.

She’s a survivalist, how do you think she will resonate with viewers?

People are feeling isolated right now and Kim has been isolated her whole life so stepping out into the real world is very overwhelming for her. I feel like once this is all over, people are going to suffer from agoraphobia because the outside world is so busy and we might become quite sensitive to it, like Kim.

How much did you bring to the character compared to what was in the script?

Was it a collaborative process?

It was very important for Sian and I to voice our opinions. Although the show features two female leads it was ultimately created by men and we had a male director, so there were moments where we just felt very strongly about our voices being heard.

How was it working with a female stunt coordinator?

[Jo McLaren] was really amazing, she choreographed everything so well and I really enjoyed working with her. There was no ego! We spend so much of the show seeing Kim outside of her comfort zone in a really bizarre setting so it was pretty cool to show the audience what she does find natural, so we had a big fight early on in the show. I’ve done a lot of combat before but it’s rare that you get to tell a real story through a stunt sequence. We just wanted to have a gruesome fight without it being overly gory or difficult to watch. It’s definitely not the most realistic fight you’ll ever watch but it is certainly one of the more entertaining ones.


There’s a Game of Thrones reference thrown in - was that your idea?

Yeah, we just wanted to do a little nod [to Arya]. That’s the role I’m known for and her most defining feature is how she can fight so we wanted to add a little Easter Egg.


Kim and Arya both kick ass - how do they differ?

Kim is allowed to be a young woman and take her time to find her place in modern-day society and that’s something that Arya wouldn’t be able to comprehend. It does feel like an evolution for myself. All of the wonderful things about Arya felt very familiar when playing Kim but it’s nice to play someone who’s more my age, more feminine and gets some romance.

Tell us about that budding romance of Kim's with Nicky

She’s watched a couple of movies and understands love stories even though the only films that she has seen are like Braveheart, which is quite a sad existence! She doesn’t have any of the shy, awkward, embarrassment that we often get when we engage with someone we are attracted to. I’ve always felt very forward in trying to say exactly what I mean so it was really nice to play a character who does that. Kim isn’t your typical fish out of water outsider. There are some things about her that allows her to blend into everyday life but it’s only when you really take notice that you see there’s something quite bizarre about her. She knows the world is going to be different but she’s ready, she’s old enough and excited by the possibility of what could be.


How would you describe the comedy of the series?

Yeah, I’d say the comedy is pretty deadpan, slightly crude, and I think Nicky [Rizwan] and Jay [Modak] are rising stars and do incredible performances. Tina is very cutting and Jay and Nicky are kind of these bumbling idiots that she gets to put down all the time. It’s such a good breakout role for Taheen. He absolutely smashed it; his delivery makes me laugh so much. There’s not a single element of these performances that I don’t enjoy on-screen. These are very short snappy episodes anyway and you never really sit in scenes for too long, but you are never bored.

Did having all these comedy actors around give you more confidence?

It was a very safe atmosphere on set and I felt like I could be silly and not feel embarrassed at all. Mawaan who is a comedian first, to watch him, the physical comedy and see how he creates something out of a couple of lines on the page was really magic. With Kim she’s never really that funny, her role is to allow other people to be funny around her really. She never really gets the joke or understands how she sets other people up and I’m ok with that because I get to be a part of something which is really good. I’ve never had so much fun on a job because everything I do is just so painful and miserable. You’re trying to create something harrowing and awful but when you’re making something fun, the whole atmosphere is brilliant even if I am the straight woman!


What kind of audience do you think will be interested in this show?

I really feel like this is such a feel-good show for so many people and not feel-good in the typical sense of it being all rainbows and smiles. There are so many very different people who have come together and created this show and for that reason, this is truly something a lot of people can enjoy.

All episodes of Two Weeks to Live will be available on Sky and NOW TV from 2nd September.
Images & info - Sky
Email ThisBlogThis!Share to TwitterShare to Facebook