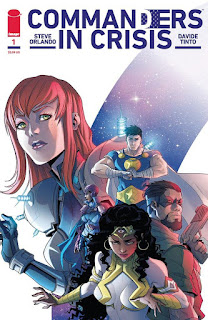 Available to pre-order now, Oliver Kent read issue 1 of Commanders in Crisis from Steve Orlando, with art by Davide Tinto...

To illustrate a point, it took Arrow eight years to reach Crisis on Infinite Earths, so it's pretty gutsy for Steve Orlando to choose to use an epic crossover as the actual starting point for an original property superhero series. And does it pay off? Yes.
Orlando had an impressive background, working on titles such as Justice League of America (am still waiting for an ongoing with The Ray) and he's also taken the helm on Supergirl, Martian Manhunter and Wonder Woman. So you know, right out the gate, that he's got the writing abilities to do the concept justice - and with art from Davide Tinto, who has a resume that includes both Spiderman and Star Wars comics, then you're looking at a pretty neat package.

If you've read any of my comic reviews in the past, then you know that the art in a comic can make or break a comic for me. It's no good if a story is great if the art is rubbish, and vice versa, if the story is awful then who cares if the art is fantastic. In the case of this title though, Tinto imbued the heroes with just enough familiarity of their DC and Marvel counterparts that we know, or think we know, the archetype we're dealing with whilst Orlando plays the same card. Characters have their obvious inspirations with Sawbones being the Batman analogue, and Prize Fighter being the Superman. But there's enough of a twist on the power and skill sets - with Sawbones fighting with scalpels rather than throwing knives and Prize Fighter being suggested to have a power dependent on the faith others have in him - that the writer has more possibilities to explore in the plot.

I rather don't want to give away the plot in too much detail, but it revolves around a dead body and a high concept twist that is revealed on the final space.
Out of our five leads, Sawbones, Prize Fighter, Originator, Seer and Frontier, I think there is enough variety of character that everyone will find at least one character they are intrigued by, at least one character that you want to see a solo title spin out of. For me, ironically a fan of Superman over Batman (lets not open that particular can of worms), that's Sawbones, the battle hardened field medic, the Batman of the title, with, it seems, added visual inspiration from Arrow thrown in for good measure, and a power set not unlike Daredevils.

You can tell Orlando is a HUGE comic book fan from the way that the title is written. Yes, it might lean into some superhero tropes a little more than others, but it wouldn't be an homage if it didn't. This is definitely one worth picking up and following - as an homage to the comic book crossover events, you really want to start with this pretty awesome first issue.
Commanders in Crisis #1 is published on October 14th with a collection of the first 6 issues coming next April
Image - Davide Tinto (Image Comics)
Written by Steve Orlando
Art by Davide Tinto
Colors by Francesca Cartenuto
Lettered by Fabio Amelia
Published by Image Comics
Email ThisBlogThis!Share to TwitterShare to Facebook