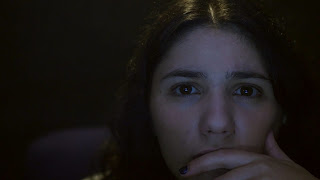 If ever there is a documentary made for this ‘Now’ then The Viewing Booth is it. Ra’anan Alexandrowicz’s premise is a simple one. He starts with a discussion Virginia Woolf had about whether if two people with different viewpoints were to look at the same photographs would they feel the same things about them. If not, why not?

So, he asks several students to watch a series of 40 videos focusing on different moments from the Israeli occupation of Palestine. The videos are split equally between Palestinian activists and Israeli sympathisers. He asks the students to comment on them. We see a handful of those students but one, Maia, becomes the focus of the film.

Maia is a Jewish American with Israeli parents. She already has some familiarity with some of the videos. Her sympathies are with Israel, but she is honest enough to admit that, even with her cynicism, these videos sometimes make her uncomfortable. As she says, even if some of these videos have been edited sympathetically or lack context, they still show something that happened. They still make for uncomfortable and ‘embarrassing’ watching.

Maia fascinates Alexandrowicz because it she is the person he is trying to reach with his filmmaking. There’s no point reaching out those who already feel the same way you do, you have to reach out for the sceptics. But Maia’s scepticism is predicated on her existing beliefs. When they watch a video of Israeli soldiers making a night time search of a Palestinian home, waking up the children in the process she is drawn to the inconsistencies of the video: why is he filming; why does one child get his name wrong; when the soldiers are gone why is it only then that one child breaks down? She does not comment on the fact that the Israeli soldiers are masked – and you hear one of the soldiers say as the come in, ‘make sure your masks are on’. Or wonder what it is like to live a life when soldiers can stomp into your home at whatever hour they choose and interrogate and photography your children.

It is not that Maia is not sympathetic. She is just cynical. And to be fair to her she is also equally – if not more – cynical about the one of the two pro-Israeli films we see.

But there is a problem at the centre of this film, which I found fascinating. It is that in the process of making it Alexandrowitcz is using the tools of manipulation himself. His choices of when to cut from the video to Maia’s face. He asks her to come back in and watch herself watching the videos. He wants to know why she is so sceptical. But I think the answer is simple. The modern world has taught us to be sceptical and using film to change a person’s belief system is a difficult thing to ask. Maia herself says that. The film does not end with any answers or certainties, because there are none. Except perhaps to say that the more context and detail one gives to a video the better. The less reasons a viewer questions its validity the better, but I think a truly open mind is hard. A camera is always a viewpoint. It is always directed at what the person holding it wants you to see and until everyone has a camera – and at one point during the night time raid it looks like the do – what can one trust?

The answer perhaps it to do the best you can to be as honest as you can with the images you have, but editing is a choice. As soon as you edit something you are distorting it.

It’s a film worth watching, especially in our solidly divided world, but it does not provide a solution to the problem of images and empathy and perhaps the ubiquity of reality television, which purports to show reality but is, of course, edited and controlled has not helped us be less cynical.
Follow Tony on Twitter @Lokster71
Image - Open City Documentary Festival
Email ThisBlogThis!Share to TwitterShare to Facebook