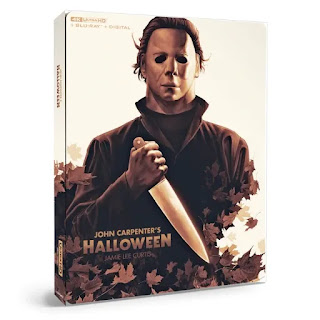 With the 4K Steelbook released in the US on Monday, a reminder of  David Ames thoughts on the original Halloween…

Widely regarded as the godfather of the slasher genre (although many would argue that 1974’s Black Christmas should technically hold that spot), John Carpenter’s 1978 classic Halloween is a landmark in what can be done with next to no budget but with a driven cast and crew. Like many films that followed in its footsteps (Paranormal Activity, The Blair Witch Project, etc.), Halloween took a minimal amount of funding and turned it into legend and, in my opinion, truly launched the slasher film into the stratosphere. Carpenter took about $325, 000 and crafted a masterpiece that is still lauded as one of the greatest of all time.

In case you have been living under a rock for forty years, Halloween follows Laurie Strode, a young, innocent girl who, after agreeing to babysit for her promiscuous friends, is set upon by Michael Meyers, a man who has escaped from a mental institution and has come home to the small town of Haddington, Illinois to continue the Halloween night slaughter that began years earlier when he murdered his sister. Meyers stalks through the community tracking down Laurie at all locations, all while the sheriff of the town and Michael’s psychologist, Dr. Loomis, try to find and put a stop to the attack.

I have to first say how wonderful it was to sit down and revisit this classic after not seeing it for a few years. I picked up the 35th anniversary Blu-ray remaster and it looks and sounds incredible. Everything is crystal clear and the movie itself doesn’t come across as stilted or old fashion which is rare with old horror movies. Sound-wise, Carpenter’s score is phenomenal and wonderfully fitting. He scored the film himself and in so doing, crafted one of the most recognizable and unnerving musical numbers in film history. People constantly compare it to “Tubular Bells” from The Exorcist but that is much more haunting while Carpenter’s Halloween theme comes across as menacing.

I don’t want to give too much away but the opening scene is one of the better crafted shots I can remember in classic horror. The POV through the mask and the first killing and then the unmasking and the zooming out to reveal Michael as a young child—it is beautiful. Also, the choice to take a William Shatner mask and paint it white was a brilliant choice and one that helped to make this faceless, emotionless killer even more intimidating.

Performance-wise, this film also delivers. Yes, some of the acting is a little old-fashioned but it adds to the charm of the film. Jamie Lee Curtis launched her career through this film and, through her portrayal, became known as one of the most important and trademark iterations of the “final girl”. Donald Pleasence, known from his role as the Bond villain Blofeld, carries such a sense of importance and professionalism. In my opinion, Pleasence is the real star. Nick Castle is slated as The Shape (the original title of the movie was The Shape but Carpenter thought Halloween was a much better choice and I tend to agree) and his performance became iconic. He is methodical and slow moving and unemotional –everything a slasher should be.

Overall, this film delivers on numerous levels. It may not be as scary or as terrifying as later iterations of the character or more modern horror fare, but it carries such a sense of importance and is executed so well that one can’t help but fall in love with the genre every time you watch it.