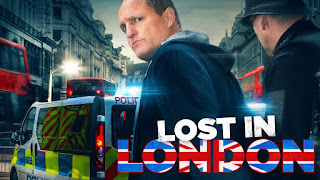 Steve Taylor-Bryant's dream comes true as he gets Lost in London with Woody Harrelson thanks to our friends at Signature Entertainment...

Most people wouldn’t want their most embarrassing night ever turned into a film; I am different to most people and would absolutely love it if I could actually remember it. Unfortunately for me, there was no press, no paparazzi, no record of any kind of what I got up to. Woody Harrelson on the other hand? In 2002 he had quite an evening in good old London town, a taxi was damaged, there was a police chase through the city, an arrest, all whilst his wife and children were tucked up in their hotel looking forward to the following day's visit to the Harry Potter set. I remember the media coverage, it was astonishing, and always vowed to read about when Woody got around to writing his autobiography. His autobiographical account of that night though would come in the form of a movie. Fine. It would star Woody Harrelson as himself. Even better. Woody would in fact write and direct the project himself as well as star. Well, who better? It would be shot live and broadcast into cinemas in real time, cool…wait! What?

There are two things that need to be considered when reviewing Lost in London. Firstly, you have to look at whether this is a good movie in the way you would any other movie. Did I enjoy the story? Yes. Did I enjoy the acting? Yes, for the most part. Would I watch it again? Yes, and I have. The second thing to take into consideration is that this is a film that runs, behind the scenes stuff aside, at around an hour and a half and it was actually shot live, streamed into cinemas simultaneously, no cuts, no do overs, no second takes. An hour and a half live performance across multiple venues, and the roads of our country’s capital. When you take all that information into your analysis of the film then the acting is improved, the filming is improved, the fact there is a soundtrack is improved, because this was a monumental, emphasis on the mental, task to pull together. You had to get lots of people to hit their marks, remember their lines, act as their characters, not break their characters, and hope nothing went wrong with any number of technical things, camera, sound, broadcasting. At the start of the film there is a few minutes of documentary footage that gives you an idea of the task ahead and the stress Woody and his crew were under, which, when you watch the film, gives you a wider appreciation of the finished product.

Whilst most of the film is based on true events, some embellished events, and some fictional, the fact that this film worked and even exists is a reminder to us all that the people involved in every aspect of filmmaking are doing a difficult job under extreme time and other constraints and that what is achievable is the product of a multitude of very skilled folk. You may watch the film and not like the story, maybe you don’t get the self-deprecating humour Woody Harrelson uses throughout, you may not like the dialogue full of nods to his favourite things, or the cameos of Owen Wilson and Willie Nelson. I will give you that, maybe the film is a bit bizarre for a lot of you, but you have to appreciate the skill it took to pull this off. I, for one, absolutely loved the film, the inclusion of Beatles lyrics and Juliette Lewis song titles into the dialogue was great, like I was being included in a joke I was maybe not supposed to be there for. Some scenes maybe felt a little improvised due to the nature of the production but the two scenes I enjoyed most were the time in the nightclub with Owen Wilson, these two huge Hollywood stars riffing off each other and bad mouthing other stars was funny, entertaining, and a nice change from the sickly sweet way celebs normally speak of their peers, and the scene in the back of the police van where the new officer who has Woody as his first arrest manages to get to speak to U2 singer Bono on Woody’s phone. Honestly that second scene is one of the funniest things I have seen onscreen for a long time.

Should you all watch Lost in London? Well, that is up to you but, from a technical achievement standpoint, it is magnificent, from a drunken night out standpoint it is all too familiar but still wholly entertaining, and it is a form of voyeuristic art so there is always that. Me personally? I absolutely loved Lost in London and still love Woody Harrelson.