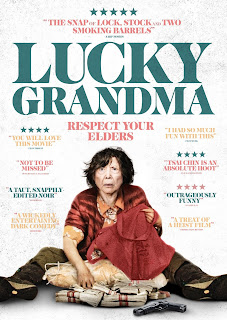 All bets are off as acting veteran Tsai Chin swindles a ruthless gang in the wildly chaotic crime-ridden comedy Lucky Grandma which comes to Digital HD in November thanks to Signature Entertainment. Watch the trailer...

Fast-paced and full of heart, laughs and wicked black humour set in the belly of New York’s Chinatown, Lucky Grandma tells the story of a cardigan clad, chain-smoking Chinese grandma who, in an attempt to get some cash, goes all in at a casino but lands herself on the wrong side of luck and the law. Having gambled away more than just chips after stealing money from a dead criminal boss, ‘Grandma’ hires a rival gangland bodyguard to protect her from a band of violent crooks who are hot on her tail and ready to reclaim the loot.

With a film career stretching back to the fifties, actor Tsai Chi starred alongside Christopher Lee in the cult favourite Fu Manchu film series, was a Bond girl alongside Sean Connery in You Only Live Twice, and starred in the ground-breaking portrayal of the lives of Chinese-American women, The Joy-Luck Club, but the revered veteran has arguably never been better than as the titular Lucky Grandma, in this frantic crime comedy written and directed by Sasie Sealy.