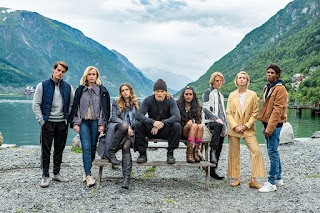 Production is now underway on the second season of the successful Norwegian Netflix Original series Ragnarok...

The Gods and Giants are back in the fictitious town of Edda where the conflict between the Gods and Giants is getting tougher. The six-episode drama is again written by award-winning writer Adam Price with Emilie Lebech Kaae and will be directed by Mogens Hagedorn.

Ragnarok is a coming-of-age drama building on, and contributing to, a new and surprising angle on Norse mythology. The second season will pick up where the first season left: What do you do when you’re a 17 year-old high schooler who has just learned that you’re up against an ancient and extremely powerful enemy that is holding an entire town, perhaps even an entire country, in an iron grip?

Magne has to accept that now that he’s ready for battle, his enemies are too many and too strong. Is there anyone else who, like him, has supernatural powers? And will he be able to find these people in time? And what happens when it turns out that his little brother, Laurits, is also quite exceptional, but that he views the world very differently from Magne? In the second season of Ragnarok, the conflict gets tougher, evil gets more focused, and the choices ever more desperate. In the midst of all this, Magne is faced with the fundamental question: How far are you willing to go in order to save your family?

The six part Norwegian language series is produced by SAM Productions, a Danish screenwriter-based production company. Adam Price and Emilie Lebech Kaae function as creators and writers, executive producer is Meta Louise Foldager Sørensen (Antichrist, Melancholia), producer Stine Meldgaard Madsen (Pros and Cons, Something’s Rockin’) and Director is Mogens Hagedorn. The second season will be six episodes and is set to premiere exclusively on Netflix in 2021.
In the meantime, here's a reminder of the Season 1 trailer

Catch up with Season 1 of Ragnarok at www.netflix.com/ragnarok
Email ThisBlogThis!Share to TwitterShare to Facebook