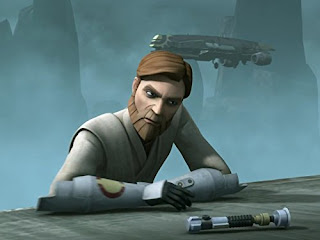 A long time ago in a galaxy far far away, Ayn Walsh starts an epic journey through the Star Wars: The Clone Wars animated series, currently streaming on Disney+ ...

'Star Wars: The Clone Wars' has really expanded the galaxy and explored characters I had completely taken for granted in the Prequel Trilogy. Looking back, it's a missed opportunity that Jedi Masters such as Plo Koon and Aayla Secura weren't given proper screen time. Thankfully the animated series takes us back to that period in Star Wars history and gives us a glimpse of life beyond the Skywalkers.

I collect both Star Wars Attax trading cards and figures in the Black Series line but I've not often bought anything associated with Sith or Jedi who I don't recognise or have much knowledge of. Except, I'm really missing out because there are some fabulous characters in the franchise who aren't very well known unless you read Legends or watch either The Clone Wars or Rebels. For example, Thrawn was someone who totally went under my radar for far too long! If you don't know him, Thrawn is an Imperial tactician whose talents have helped him rise through the ranks. He's a threat to the rebel alliance and a cunning warrior.

This week I've started The Clone Wars: Season 1. It's been around for 12 years (TCW debuted in 2008) and I'm only just now 'discovering' it. Still, the computer animation is cute and the storytelling nothing short of spectacular. Though only about 25 minutes in length, each episode is tightly written with nice character development and plenty of space battles or lightsaber duels. One of my favourite characters is young Ahsoka Tano, Padawan to Anakin Skywalker - she's confident, wise and brave, and I know her story will evolve as she grows. 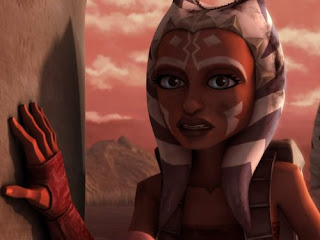 It's important not to get The Clone Wars mixed up with an animated series called 'Star Wars: Clone Wars' that was broadcast from 2003-2005, as they're not the same show! In fact, after Disney acquired the rights to Lucasfilm in 2012, the latter was made non-canonical. So, it's the 2008-2020 CGI fest that I'm accepting as Canon.

In 'A New Hope' it was once a mystery as to who the Jedi were. When referring to the lightsaber, Obi-wan said to Luke, "An elegant weapon for a more civilized age". The Jedi hermit also gave a mention to Darth Vader and how the Jedi were hunted down. George Lucas visualised these events in The Prequel Trilogy; we got to see the Jedi as observers and negotiators, peacekeepers and warriors. Because the films were focused on telling Anakin's fall to the Dark Side of the Force, we didn't get to see anything more. The Clone Wars rectifies this, being set between Episodes 2 (Attack of the Clones) and 3 (Revenge of the Sith).

Of course we do know how things will turn out: Palpatine will execute Order 66 and the Jedi will face the wrath of the Sith. Some are destined to survive - Ahsoka, Obi-wan, and Yoda are three of them! But life in the galaxy far, far away will never be the same again…

As my journey through this series continues I'll write up some more thoughts and discoveries. I'll try not to give away important spoilers but I'll flag such content if they shall rise. I'm already looking forward to the conclusion of Season 1.

MTFBWY — "The winding path to peace is always a worthy one, regardless of how many turns it takes."
Images - IMDb
Email ThisBlogThis!Share to TwitterShare to Facebook