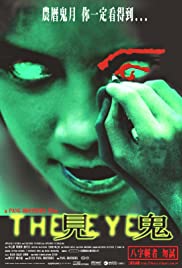 We love Halloween here at The DreamCage and we love the countdown to it even more as, every day in October, David Ames opens a window (well, writes an article) in his Hallow-vent Calendar of Asian horror films. His choice for Day 1 of Hallow-vent is The Eye... 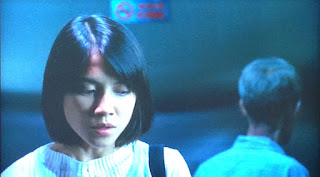 The first film this year is one that Fox (my best friend) and I had been talking about watching for years. As huge fans of horror, both of us have perused the foreign market as much, if not more, than the American fare, and so when this film kept popping up on best of lists, we knew eventually we would need to watch. So after years of just talking about it, we finally followed through and sat back to enjoy the Pang Brothers’ 2002 Hong Kong/Singaporean film The Eye.

Classical violinist Wong Mal Mun has been blind since the age of five, but not for long. With a new procedure, she can get an organ transfer and replace her eyes with those of someone deceased. At first the transition is painful and rough, but luckily she is comforted by a young girl with cancer in her hospital. As she goes home, the transition continues to be better, but something is off. She starts to see strange figures in crowds, seemingly foretelling gruesome deaths that are to happen shortly.

Fearing what she does not understand, Mun goes to visit a psychologist, Dr. Wah, who initially disbelieves, but as his relationship with Mun deepens, he starts to believe and understand what she is telling him. In a desperate search for answers, Mun and Wah travel to a small village in search of the family of the girl from whom Mun’s new eyes came. What they discover there changes both of their perceptions about the afterlife, family drama, and the need for love.

Then, the film seemingly goes off the rails in a strange supernatural disaster scene, that weirdly fits with the whole film, although to talk about it simply in the realm of the film as a whole seems to make utterly zero sense. The ending is sweet and romantic, and once again, doesn’t seem forced or out of place.

Angelica Lee portrays Mun as a strong woman who doesn’t simply quell in the face of fear. The performance is easily the strongest in the film, and she does most of the heavy lifting, elevating the work above a simple horror film. Sadly, most of the other characters are forgettable, especially when you factor in the relatively forced love story between Mun and Wah.

Like many films this year, The Eye is most definitely a product of its time, including some sounds and effects that have been used so often, that at this point they feel cliché. That being said, the film isn’t bogged down by the effects. Instead, the few short bursts of “ghosts” that we see are done remarkably well by the actor portrayals and Lee’s reaction.

I had the displeasure of seeing the American version of this film years before I had finally gotten around to the original, and I must say, and I am sure I will a lot this year, that this far surpasses the remake. There are genuine moments of horror that make this film worth the runtime alone, and the insanely out-of-left field ending is something you have to see. The whole film just works, justifying its place on all of those lists I discussed before.