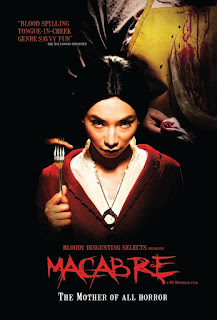 We love Halloween here at The DreamCage and we love the countdown to it even more as, every day in October, David Ames opens a window (well, writes an article) in his Hallow-vent Calendar of Asian horror films. His choice for Day 10 of Hallow-vent is Macabre ... 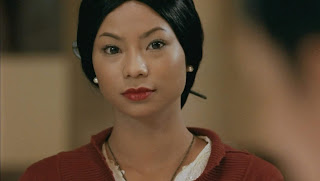 Macabre is a strange and somewhat unique take on the home invasion horror film, made famous by such movies as Them and The Strangers. Only, instead of someone invading the home, they are brought there for torture and dismemberment.

As a premise, the plot is somewhat convoluted, but as anyone who has seen this type of film can agree, that isn’t really the point. This film follows a group of friends who, on the way to the airport, pick up a young, beautiful girl who is stranded and agree to take her home. When they arrive, they are introduced to the girl’s mother and brothers, and this is where the fun begins.

After being drugged and separated, the gore and, for lack of a better term, macabre acts begin. This film is so full of blood and guts that anyone who enjoys the genre will have more than their fair share. The rest of the film is an escape picture, where the remaining members of the group are being hunted throughout the house and the grounds, and even an appearance from the police can’t save them.

This film feels familiar, and if you were looking for comparisons, I would say anything from You’re Next and Ready or Not, to House of 1000 Corpses and The Texas Chainsaw Massacre. It feels like the Mo Brothers pulled all the best elements from other films in the genre, and came away with this wonderfully fun piece of gory horror. There are weird secret societies and cannibals, and it really goes all out in providing the ultraviolence that we are so used to seeing in films like Saw, but it is handled almost elegantly.

Overall, the cast is somewhat forgettable, barring a few exceptional performances. Arifin Putra plays a deliciously psychopathic Adam, the son of the family, with a robotic stillness and coldness that I haven’t seen someone pull off since the T-1000. Julie Estelle is wonderful as Ladya, the girl whom it seems takes on the classic role of the Final Girl very early on. She is strong and resourceful, and not afraid to fight when pushed to the limit.

Honestly though, if we are being honest, the best and most spectacular role is Shareefa Daanish as the matriarch and overall antagonist Dara. She is terrifying in the best possible way, and gives off a strangely magnetic performance. Her eyes and her slight head movements convey so much, similar to the best moments in a Halloween or Friday the 13th film, and her bloodthirsty coldness is more disturbing than any of the haunting, blood-filled scenes we get to witness throughout the film. She was BORN to play this role.

The practical effects, ultra-violence, tortures, and kills are all perfectly executed. This film isn’t trying to be something it isn’t. It is striving to be a wonderful addition to the genre and it plays perfectly well with others of the like. Everyone who is a fan of splatter films and revenge thrillers alike should check this one out.