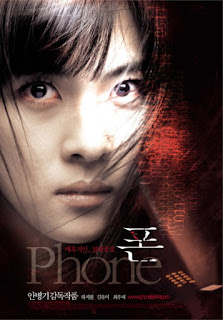 We love Halloween here at The DreamCage and we love the countdown to it even more as, every day in October, David Ames opens a window (well, writes an article) in his Hallow-vent Calendar of Asian horror films. His choice for Day 12 of Hallow-vent is Phone ... 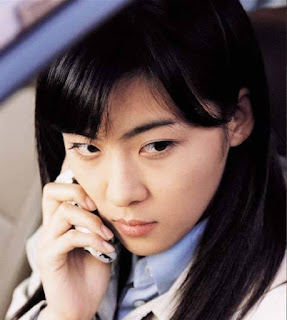 Do you remember the classic urban legend of the mysterious phone calls? The one where a woman answers a phone and an anonymous person on the other end tortures her with horrendous statements, warnings, and threats that she will die, only later to uncover that the call was coming from inside the house? This trope has been played out in many films including One Missed Call and Scream, so when I sat down to watch today’s movie, I thought it was another of the sort. Luckily, today’s viewing runs with that idea and then heads in a completely different direction. Today, we look at Ahn Byeong-ki’s South Korean supernatural horror film, 2002’s Phone.

This film follows Ji-won, an investigative journalist, who, after exposing a pedophile ring amongst prominent society members, must go into hiding. She has been receiving threatening phone calls and is forced to hide until after the court case surrounding her report is finished. She reaches out to her friend (maybe sister?) Ho-jung and her husband Chang-hoon, who invite her to stay at their empty home in a different part of the city. Ji-won is very close with this family, having years before donated her eggs to Ho-jung so that the family could conceive a child.

When the calls persist, Ji-won changes her number, and as she does so, strange things begin to happen. Awful screams and sounds will ring through her phone, and when Young-ju, Ho-jung’s daughter, accidentally answers the phone, her behavior begins to radically change. She starts to reject any of her mother’s caring advances and instead lavishes all of her attention on her father, even going so far as to act sexually toward him, made even more disturbing by the fact that Young-ju is only probably 8 or 9.

Ji-won, disturbed by the recent change in Young-ju, and also haunted by her new number as well as the continued stalking by those she has implicated in the sex scandal, decides to investigate. What she finds when she tracks down the history of her number is a strange and recent history of maiming and violence associated with the previous owner of the phone, and when all is finally revealed, hidden truths held by some of the main characters come to light in supernatural and violent ways.

I don’t want to give too much away, although I can say that where I thought this film was heading and where it ended up were completely different. Once I saw the trajectory of the plot, some things became rather obvious, but still, it was such a turn into left field that I really enjoyed the ride.

The acting was pretty decent with Ha Ji-won portraying Ji-won well. She could play up the strong woman who isn’t afraid, but also was able to seem meek and scared. Kim Yoo-mi and Choi Woo-jae, Ho-jung and Chang-hoon respectively, were believable as the couple, and Woo-jae actually pulled off a pretty miraculous character shift.

The best performance of the entire film was hands down delivered by Eun Seo-woo, who played the adorable, and sometimes very frightening Young-ju. She portrays an innocent little girl perfectly, but when the shift comes, her facial expressions and demeanor change on a dime and she becomes terrifying. That smile…just wow. I am not sure what she has done since this film, but I would guess that she would be amazing still, based on this performance.

The film itself is beautiful to look at. The cinematography reminds me of other films in this genre: polished, muted, and strangely stunning. Other films with the same style would be the previously reviewed The Red Shoes, or really any of the more modern American horror films like Slender Man, Pulse, or The Grudge. It’s muted, and dark and gritty, but it works.

The real star of the entire film is most definitely the incredible score by Lee Sang-ho. The music is perfectly understated at moments, and loudly impressive at others. It also pulls heavily from Beethoven’s “Moonlight Sonata” but adapts different elements of that classical piece to add to the film. It was so good that I am currently trying to track down an official score to purchase. I would love to listen to it on its own.

This film doesn’t really add anything to the genre, and while it isn’t anything crazy or remarkable, it is a very enjoyable watch. I enjoyed it on multiple levels, and it is one of those horror films that could work almost as a psychological thriller as well. Where the story and originality may lack, the music and filmmaking pick up the slack.
Follow David on Twitter @TheDavidMAmes
Image - IMDb
Email ThisBlogThis!Share to TwitterShare to Facebook