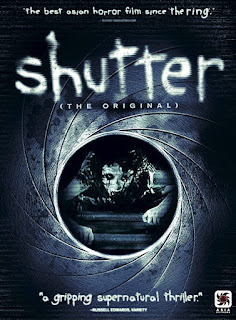 We love Halloween here at The DreamCage and we love the countdown to it even more as, every day in October, David Ames opens a window (well, writes an article) in his Hallow-vent Calendar of Asian horror films. His choice for Day 2 of Hallow-vent is Shutter ... 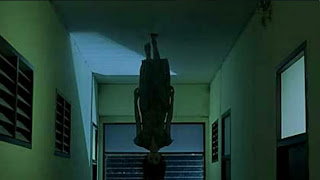 Today’s film was the original version of an American film I unfortunately watched first. Luckily, I definitely enjoyed the original Thai version more. One of the few films hailing from Thailand, today we look at Banjong Pisanthanakun and Parkpoom Wongpoom’s 2004 supernatural horror film Shutter.

Shutter follows the haunting and supernatural torture of Jane and Tun, a couple living together after college. On the evening of a wedding, Tun and Jane are seen drinking with numerous close friends of theirs, rehashing old memories and generally having a great time. When it is time to go, Jane drives herself and Tun back home, flirting and lovingly talking with one another. Just as Tun is telling Jane how beautiful she really is, a mysterious girl walks into the road, and before Jane can react, their car strikes her, flipping her body overtop of the car and landing dead in the road. While Jane wants to help, Tun convinces her to leave the body.

Over the course of the film, we are then treated to a cadre of classic supernatural tropes, all surrounding the now haunting of Tun and Jane. From strange dreams and hallucinations to stalking, the spirit will not relent, trapping Jane in a bathroom, and causing severe neck pain in Tun, as well as visions.

When Tun’s closest friend appears at his apartment, tortured and disheveled, begging for mysterious negatives, Tun knows that the spirit has reached out to haunt his friends as well. Before Tun can stop it, his friends leaps off the balcony, killing himself. At the hospital, his friend’s new widow informs Tun that the other two friends from the wedding have also jumped off their respective buildings.

The end of the film takes multiple turns and truly adds to the horror. Between the hauntings, insanity, and revenge, we are treated to a wonderful denouement that provides both closure and questions.

The performances in the film were relatively well done, especially by the two main actors: Natthaweeranuch Thongmee as Jane, and Ananda Everingham as Tun. While Thongmee is wonderful at portraying disturbance and sadness, Everinham is a master of representing fear and regret. Their chemistry is one of the stronger aspects of the film.

The true star of the show is definitely Achita Sikamana as the tortured spirit Natre. She was sweet and innocent at times, and downright terrifying at others. She showcased the widest range and was single-handedly the most powerful force in the film.

The music and the directing was good, but very much a product of the times, and so the camera angles, music swells, and coloring are all rather clichéd by today’s standards. Still, the deft hand it took to craft the story and the film as a whole is something for which the dual director team deserves credit.

Before I go today, I want to draw attention to two scenes in particular that are so well done, the film is elevated above a simple supernatural horror movie and into all those lists of best Asian horror that Shutter finds itself. There is one in which the climactic moments of the scene are all shown in a mixture of darkness and flashing camera bulbs. The timing and orchestration combined with Everinham’s reaction and Sikamana’s presence and portrayal make it so effective. The second also involves these two actors but is a chase scene of sorts, in which Tun is descending a fire escape as Natre’s spirit is crawling down above him. So, so good.

So, if you want to enjoy something that is fun, familiar, and done very well, check out 2004’s Shutter. If you want a comparison, think I Know What You Did Last Summer mixed with elements of Ringu and Ju-On and you will be pretty close. If nothing else, it will make you rethink camera flashes.