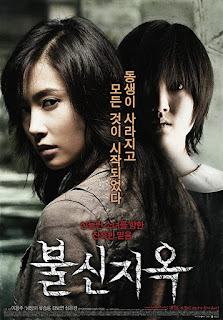 We love Halloween here at The DreamCage and we love the countdown to it even more as, every day in October, David Ames opens a window (well, writes an article) in his Hallow-vent Calendar of Asian horror films. His choice for Day 21 of Hallow-vent is Possessed ... 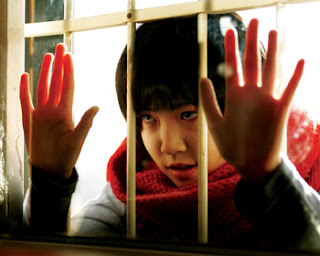 Possession movies are always some of my favorite. Maybe it is because the idea has always fascinated me. Maybe it’s because The Exorcist is my favorite horror movie of all time. Or, just maybe there is something genuinely frightening about the idea of being trapped in your body while someone or something else uses it; something almost primal. Today, we look at Lee Yong-ju’s 2009 South Korean horror film Possessed (also known as Living Death).

Hee-jin is an incredibly stressed college student who is pulled in too many directions at once. She works, tutors, goes to school, and continuously worries about her zealot mother and her special needs sister. Ate one evening, Hee-jin receives a call from her mother alerting her that her sister, So-jin is missing. Hee-jin heads home only to find that her mother refuses to call the police and instead thinks that simple prayer will bring her back.

When a strange string of suicides strikes the apartment complex, and one of these strange neighbors who committed the act leaves a message for So-jin in her suicide note, the detectives and Hee-jin begin to learn that something stranger than just a runaway child is happening.

When a shaman begins to appear and strange occurrences between the family and the neighbors begin to ramp up, and a strange crane begins to haunt Hee-jin’s dreams, she must figure out what is happening, and with or without the help of the detective or her mother, discover the whereabouts of her sister before it is too late.

This film is not your typical horror fare. There are few, if any, actual scares. Instead, Lee chooses to build a story slow-burn over the course of the film, and does establish quite the mood. Absent from this film are the small moments of levity which help in juxtaposition to all the dark. Instead, we are given something that seems bleak from start to finish.

The performances are okay, nothing to really write home about, although Nam Sang-mi (Hee-jin) delivers a pretty convincing performance as a worried and stressed sister. And, when she begins to struggle with supernatural issues of her own, her snap into that role is pretty convincing. Also, as a note, Kim Bo-yeon plays the fanatical mother with a timber and coldness that really helps to push the ideas of faith in the film.

The look is sleek and dark, and reminiscent of other polished films like The Red Shoes or Slender Man. The camera is used deftly to move in between characters and scenes, and we aren’t manipulated as we would be in other films like this. It is subtle in the best possible way.

The biggest question about the film is the overall message or philosophy that Lee seems to be searching for. There is an interesting pull between Shamanism, which he seems to treat with disdain, and Christianity, which he seems to respect unless it is taken to extremes. Also, the inclusion of the mysterious crane add a sense of otherworldliness to an already unsettling film.

This is definitely one that I will watch again, if nothing else, then for the wonderful development and intricate philosophy that I am still not quite sure I grasp fully. Give this one a shot, if you feel less like jumping and more like thinking.