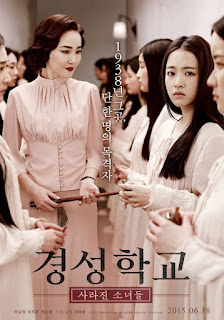 We love Halloween here at The DreamCage and we love the countdown to it even more as, every day in October, David Ames opens a window (well, writes an article) in his Hallow-vent Calendar of Asian horror films. His choice for Day 28 of Hallow-vent is The Silenced ...
Find the full calendar for Hallow-vent 2020 here. 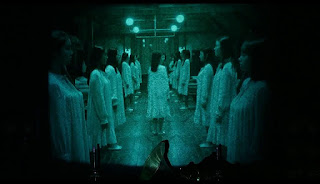 Occasionally you come across films that span multiple genres and do so deftly. Two genres that seem to work perfectly well together are Horror and Mystery, showcased by famous works like The Shining, Insidious, A Tale of Two Sisters, The Strangers, Silent House, and countless others. The tension that builds around the unknown punctuated by terrifying elements of horror blend to create an entirely unique experience, and honestly, the best horror does contain some component of mystery. Today we look at a somewhat unknown but revelatory South Korean film from 2015: Lee Hae-young’s The Silenced.

To understand the larger aspects and implications of this film, it is first somewhat necessary to understand 1930s Korea, especially in terms of the Japanese occupation before the second world war.

This film takes place in Gyeongseong in the later part of the 1930s, and follows a young, sick girl named Ju-ran. Halfway through the semester, Ju-ran is taken by her step-mother to a boarding school that doubles as a sanitarium for the sick. Unable to deal with the strange illness she suffers, Ju-ran’s parents have all but abandoned her in this place which seems to thrive on military style discipline and authoritarianism.

When she arrives, it is immediately apparent that each of the girls have been given different names, all of Japanese origin, and are forced to follow Japanese customs inside the immense and imposing school. A loner and an introvert, Ju-an, now known as Shizuko, is instantly the target of bullies who recognize her weakness. Only by befriending another girl, Yeon-deok, does she survive her time spent here.

After beginning a medical regiment, Shizuko begins to heal, even developing somewhat strange abilities. While before she wasn’t able to even jog without coughing up blood, she has developed increased stamina and even strength. Along with this comes strange mood swings, and Shizuko starts to notice these same problems in other students as well. When students begin to react strangely to the medicine, contorting into disturbing shapes, hiding under beds, bleeding from orifices, and eventually going missing, the two friends begin to suspect something else is happening.

That is all I can say, because while this film is vast in its content, any more would reveal major plot points. What I can say is that this is a revelation of filmmaking. I was initially worried, based on the opening five minutes, that this would be yet another beautiful but generic high school drama. Thank goodness I was wrong. Instead what I was treated to was a brilliantly crafted, mysterious, horror-tinged drama and scathing political commentary about Japanese imperialism and overall indoctrination of Korean youth in the 30s, all things that I was only tangentially aware of before this.

The cinematography is breathtaking, from the opening scene calling back to The Shining, with a beautifully haunting score. The camera movements are graceful and help to tell the story well, revealing just enough, and leaving many ideas to our imaginations.

The acting is top notch across the board, with Uhm Ji-won playing a deliciously deceitful headmistress who is so cloyingly sweet at times, but genuinely unsettling when her true character is revealed. All of the girls also play their parts exceedingly well, with Park So-dam turning in a moving performance as Yeon-deok.

Outpacing everyone in the film is Park Bo-young, the young actress who plays Ju-ran, and reveals herself to be one of the best in the business regardless of age. She is able to effectively pull off subtlety and sadness but also real strength and power. She is meek when she needs to be, but she is downright awe-inspiring when her character finally comes to fruition for the unsuspecting ending. I know that some will find the ending out of place, but I absolutely loved it. It was fun and interesting, and unlike anything I have seen before.

The set design is spectacular. The school is imposing, almost a character in and of itself, and calls to mind other gothic locations like Dracula’s castle or the House of Usher. This film seems to capture the same gothic tendencies and feelings as A Cure for Wellness or Crimson Peak (both films I absolutely love), but where those films fell short, this succeeded. If you haven’t had the pleasure of seeing The Silenced yet, you HAVE to do so.