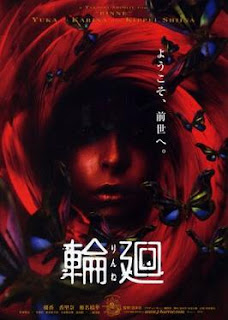 We love Halloween here at The DreamCage and we love the countdown to it even more as, every day in October, David Ames opens a window (well, writes an article) in his Hallow-vent Calendar of Asian horror films. His choice for Day 29 of Hallow-vent is Reincarnation...
Find the full calendar for Hallow-vent 2020 here. 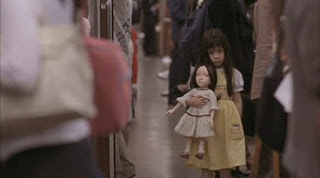 I remember, about a decade ago, traveling to my best friend’s house to hang out and watch a movie. He had been telling me he picked up a horror movie from Japan that was supposed to be good, and going in, I had no idea what to expect. The cover was interesting looking, but seemed to be just another Asian horror film with a pale woman, dark hair hanging over her face. Instead, what I was treated to was something strange, and complicated, and interesting. Today, I went back after 10 years to rewatch, and hopefully re-enjoy this J-horror picture: Takashi Shimizu’s 2005 film, Reincarnation.

This film is a rollercoaster ride, jumping between different time periods, and seamlessly integrating the supernatural into a pseudo-philosophical journey. It opens with a series of vignettes where random people throughout Japan see spirits and ghosts, including one man who views himself murdering people at a hotel.

When the actual plot begins, we meet a young woman named Nagisa Sugiura, an actress, who is cast in a film to play one of eleven murder victims from a famous mass murder in Osaka. As soon as she is cast, she begins to experience hallucinations and dreams which seem to place her at the scene on the day of the incident. Throughout the course of filming, Suguira begins to not only find herself in the hotel lat the time of the incident, she also seems to be haunted by the apparition of the young murder victim she is supposed to portray.

Meanwhile, a young student, Yayoi Kinoshita, is researching the events of the murder because she is also having hallucinations and visions which place her at the hotel on the day of the attack. Throughout her research, she interviews a young actress who says she is a reincarnation of one of the murder victims, and when the actress goes missing, Yayoi travels to Osaka to meet with the only surviving person from the attack: the wife of the murderer.

I can’t really give anymore away because the plot lines so intersect that giving any other major plot points away would spoil the denouement, which is complex, but entertaining. While this film becomes incredibly convoluted, it is an experience, and when everything is revealed, the ending isn’t quite what we imagine. In fact, the final scene is somewhat haunting, and the implications of what certain characters have known all along are exposed as disturbing to the extreme.

The film definitely didn’t have the highest budget but the performances of Yuka (Sagiura) and Karina Nose (Yayoi) help to elevate a simple paranormal horror film to a different level. Yuka’s performance, especially, is wonderfully reminiscent of Shelley Duvall in The Shining.

Overall, I really enjoyed this film. I do think they may have tried to do too much, and incorporated too many horror tropes (ghosts, reincarnation, possession, creepy dolls, etc.) to be as truly effective as possible. The scene with the doll, while creepy in and of itself, really has no place here. It would have been equally effective without the scene, although on the scare factor, it definitely delivers. Still, I would definitely recommend this film for a leisurely afternoon. Make sure you pay attention though, because while it is a fun watch, the shifting perspectives and timelines can become confusing.