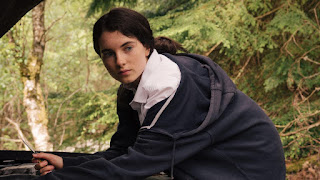 Writer and director Joseph Ollman, with co-writer Christopher Spurdens, has created a short film that quite literally packs a punch. Bitter Sky is a fantastic advertisement for what can be achieved in the short form. From the opening scene of Nia (Darci Shaw), an English schoolgirl out of place in the Welsh valleys, being bullied there is absolutely no let up in tension. Nia is stuck in the valleys living with her abusive stepfather Roy (Richard Harrington) after her mother has upped sticks and left them. Despite Roy’s claims that the mother doesn’t care for Nia anymore, a brief telephone call from her mother implies that she has fled out of fear of Roy, who doesn’t get really abusive until the end of the film but there is a rage and force of control bubbling under the surface of Harrington’s performance throughout. Nia has discovered an abandoned car in the local woods and is slowly pinching spare parts from the scrapyard to try and fix it up and escape the hell that is her life. After being caught taking a battery by the yard owner's grandson Aron (Rowan Jones) Nia thinks her dream of escape is over but she manages to make an unlikely alliance with Aron, who agrees to help her in return for a trip to Liverpool when Nia goes in search of her mother. As the film climaxes, Nia is caught by Roy.

There is so much to wax lyrical about with Bitter Sky. The writing is stunning, the cinematography is suitably gritty to the story, the location is remote and unnerving, but it is the three main performers that deserve most of the plaudits. I have seen Richard Harrington in many things and he is always good value for money, a proper decent character actor, but I have never had the chance to see an evil side to his performance. In Roy, he is genuinely terrifying and wholly believable and would be the films crowning glory if it wasn’t for a stunning turn by Darci Shaw who, on this performance, I am confident has a huge future ahead of her. She plays the victim incredibly well but there is a steel about Nia in the story that Shaw manages to pull off with just her eyes and it is the performance of a seasoned actor, not a young girl just making her way in the world. Darci Shaw is just magnificent, somehow manages to outshine her more illustrious co-star and takes a fantastic piece of writing and elevates it into something truly special. My only hope is that Bitter Sky gets as wide an audience as possible because what this team of cast and crew have done in the short film form is spectacular.