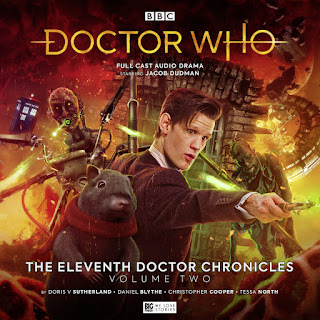 Geronimo! The Eleventh Doctor will be materialising in four brand-new audio adventures from Big Finish, due for release in September 2021...

For the first time, Big Finish’s Doctor Chronicles range is to be produced as a full-cast drama, with cinematic sound design and complete musical score.

Jacob Dudman takes on the role of the mercurial Time Lord in Doctor Who: The Eleventh Doctor Chronicles, alongside a talented voice cast which includes Jo Woodcock, Nicholas Asbury, Jeany Spark and Paul Panting.

Together they will face zombies on a space station, populist preachers on a distant planet and alien lifeforms who live down the plughole.

The four forthcoming adventures are as follows:


The Day Before They Came by Daniel Blythe

In the shabby seaside town of Bayview, Kayla Worthington is sitting on the beach waiting for an alien invasion. Her patience is rewarded when an alien arrives, although he doesn’t seem to be invading. He’s called the Doctor, and he wants to buy her a cup of tea.


The Melting Pot by Christopher Cooper

Arriving on Piir to sample the local cuisine, the Doctor finds a society wildly different from the one he remembers. With violence brewing on the streets, the Doctor will have to get to the bottom of what has gone wrong on Piir, before the world tears itself apart.


A Tragical History by Tessa North

To most of the inmates in Hythe Prison, life is miserable. However, some are living out their idealised lives within its walls. Amongst the dank conditions, the Doctor is about to uncover the key to everything he could ever desire.

Actor Jacob Dudman said: “I’m thrilled to be stepping into the role of the Doctor for these full-cast audio adventures! As a fan, it's really exciting that Big Finish has made this move into creating an Eleventh Doctor full-cast range, and I will give it my absolute all to do the character justice.”

Doctor Who: The Eleventh Doctor Chronicles Volume 2 is now available to pre-order as a collector’s edition CD box set (for £22.99) or digital download (for £19.99) at the www.bigfinish.com website.